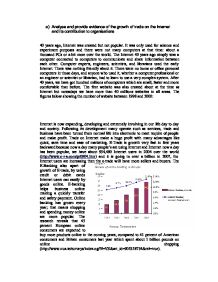 a) Analyse and provide evidence of the growth of trade on the Internet and its contribution to organisations 40 years ago, Internet was created but not popular. It was only used for science and experiment purposes and there were not many computers at that time: about a thousand PCs or a bit more over the world. The Internet 40 years ago simply was a computer connected to computers to communicate and share information between each other. Computer experts, engineers, scientists, and librarians used the early Internet. There was nothing friendly about it. There were no home or office personal computers in those days, and anyone who used it, whether a computer professional or an engineer or scientist or librarian, had to learn to use a very complex system. ...read more.

E-Trade is growth very fast in few years backward because now a day many people's are using Internet and Internet now a day has been popular, we have about 934,480 Internet users in 2004 over the world (http://www.c-i-a.com/pr0904.htm) and it is going to over a billion in 2007, the Internet users are increasing then the e-trade will have more sellers and buyers. The E-Banking also apart of growth of E-trade, by using credit or debit cards Internet users can easily by goods online. E-banking helps business online making a quickly transfer and safety payment. Online banking has grown every year; that means shopping and spending money online are more popular. ...read more.

This represents a 52 percent increase on the number of UK companies ordering online last year. The study reveals that 91 percent of businesses now have access to the Internet, while 80 percent have a website. Around 20 percent of firms also reported making payments online; an increase of nearly 20 percent on this time last year. Trading and marketing on the Internet is the most efficient way to develop the organisation that's why Internet is very necessary and its contributions to organisation are very important. E-trading has obviously grown very fast since last decade until now and will more expand in the future because it has advantages which make enormous profit for business and many important elements support it. With the incredible development of technology in the future, Internet will have more chance to demonstrate its real effect to organisation and social life. ...read more.