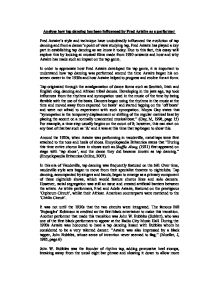 Analyse how tap dancing has been influenced by Fred Astaire as a performer Fred Astaire's style and technique have undoubtedly influenced the evolution of tap dancing and from a dancer's point of view studying tap, Fred Astaire has played a key part in establishing tap dancing as we know it today. Due to this fact, this essay will explore this by looking at musical films made from 1930 onwards and how and why Astaire has made such an impact on the tap genre. In order to appreciate how Fred Astaire developed the tap genre, it is important to understand how tap dancing was performed around the time Astaire began his on-screen career in the 1930s and how Astaire helped to progress and evolve the art form. Tap originated through the amalgamation of dance forms such as Scottish, Irish and English clog dancing and African tribal dances. Developing in the jazz age, tap took influences from the rhythms and syncopation used in the music of the time by being flexible with the use of the beats. Dancers began using the rhythms in the music at the time and moved away from expected 'on beats' and started tapping on the 'off beats' and were not afraid to experiment with such syncopation. ...read more.

Astaire utilised contrasting styles, using tap incorporated with different genres such as ballroom and a lyrical modern style in keeping with the time. He showed rhythmical movements with his feet that were very original, whilst keeping his upper body relaxed. Top Hat is one of his earlier films, but is considered to be a classic, as it shows the continuity of Astaire's style throughout, interlaced with acting and the use of the story line and scenery. In the solo number 'Top Hat, White Tie and Tails' Astaire used his legendary cane for the first time, with the cane amplifying his tap steps. By having many unpredictable pauses in the routine, Astaire kept the audience on the edge of their seats by almost implying that the intricate footwork was improvised, seemingly pausing to decide on the next step, to keep the spontaneity. Astaire added humour to the routine as he used his cane as a machine gun to extinguish the chorus with his taps mimicking the sound of the gun. He 'fires' from many different positions, from the front, behind his back and even when turning, using different tones for his tap depending on where he is holding the cane. This solo shows Astaire's use of originality and his ability to combine many styles together. ...read more.

Astaire also insisted that his full figure was always in the camera shot, so that the audience would get a better appreciation of the dance sequences. Astaire used few special effects as he felt this brought the audience further away from the theatre, however in 'Bojangles of Harlem' he used process photography to allow the effect of dancing with and against three shadows of himself. There were also very few cuts, to different points of view. As seen in 'Swing Time' the camera is on a crane to follow Astaire and Rogers up a flight of stairs from a lower dance floor to a higher one. This is the first time Astaire used this, as it would not have been as equally effective in the theatre. These are some of the ways that Astaire influenced tap as a performer he also influenced other performers such as Gene Kelly. The fact that Kelly drew on Astaire's dancing style and deliberately strove to ensure that his own dancing style was different to Astaire's, shows that Astaire was paramount to the evolution of tap. Astaire has become a part of the history of tap due to the fact that he influenced other performers who have further shaped tap into the dance form that we know today. "Because the silver screen made Astaire automatically the most widely seen dancer in history, he unquestionably inspired more dance careers than can ever be accurately tallied." (Kriegsman, A, 1987, page D1) ...read more.