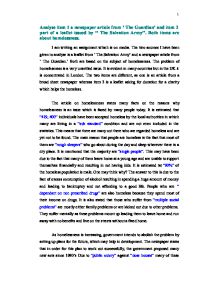 Analyse item 1 a newspaper article from ' The Guardian' and item 2 part of a leaflet issued by '' The Salvation Army''. Both items are about homelessness.

Analyse item 1 a newspaper article from ' The Guardian' and item 2 part of a leaflet issued by '' The Salvation Army''. Both items are about homelessness. I am writing an assignment which is on media. The two sources I have been given to analyse is a leaflet from ' The Salvation Army' and a newspaper article from ' The Guardian.' Both are based on the subject of homelessness. The problem of homelessness is a very unsettled issue. It is evident in many countries but in the UK it is concentrated in London. The two items are different, as one is an article from a broad sheet newspaper whereas item 2 is a leaflet asking for donation for a charity which helps the homeless. The article on homelessness states many facts on the reasons why homelessness is an issue which is faced by many people today. It is estimated that "419, 400" individuals have been accepted homeless by the local authorities in which many are living in a "sub standard" condition and are not even included in the statistics. This means that there are many out there who are regarded homeless and are yet not to be found. The main reason that people are homeless is the fact that most of them are "rough sleepers" who go about during the day and sleep wherever there is a dry place. ...read more.

As 'The Salvation Army' is a charity which helps to build long term projects for the homeless, they have to find a way to make people pay attention and one strategy used is the use of emotional language. There are many examples in which emotional language is used but the main ones are: "Once in the streets, homeless people become prey to all sorts of illnesses, all potential killers. In fact over 600 people a year on the streets die on the streets." In this sentence the word "prey" is used. The literal meaning of "prey" is a victim. This tells the reader that homeless people are victims of cold weather and the use of this word is emotional and used to make a point; it is also supported by a fact "600" making this statement true. Another sentence where the use of language is strong is " With your generosity we can give vulnerable people not only a happier Christmas but a brighter future too". The word "generosity" is used to give an opinion of being helpful or kind. This suggests that with the help of the people outside giving donations it can give "vulnerable" people a happier Christmas and give a lifelong help of a good future. ...read more.

It also begins on with what kind of people are most likely to be homeless which can tell the reader how homelessness has begun. The information on how homelessness has increased during the years shows the reader how it has become a more highly regarded issue and is something to think about. It also shows what the government is doing to tackle the problem and how at a yearly basis new initiatives have been introduced. The reader is left to make their own opinion about homelessness whether it is an issue worth thinking about and, make a public stand to it or leave it to the government to sort it out. The leaflet has a more emotional tone for public appeal on donating for a charity which is helping to reduce the problem of homelessness. The Salvation Army is a charity which is based on people's donation to help the homeless and develop long term projects for a good future. It gives information on what kind of conditions the homeless have to sleep in. it also shows a case study to support their success. It is not as informative as the newspaper article. It has no fixed presentation device unlike the newspaper article which is all set in columns. Towards the end of the leaflet the reader is left to make a choice of feeling sorry for the homeless and donate money or is left untouched by the story about Jim. 1 ...read more.