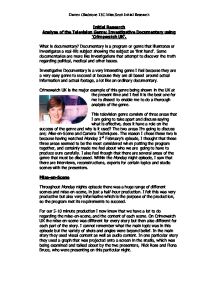 Initial Research Analyse of the Television Genre; Investigative Documentary using 'Crimewatch UK'. What is documentary? Documentary is a program or genre that illustrates or investigates a real-life subject showing the subject as 'first hand'. Some documentaries are more like investigations that attempt to discover the truth regarding political, medical and other issues. Investigative Documentary is a very interesting genre I feel because they are a very easy genre to succeed at because they are all based around actual information and actual footage, a lot like an ordinary documentary. Crimewatch UK is the major example of this genre being shown in the UK at the present time and I feel it is the best one for me to dissect to enable me to do a thorough analysis of the genre. This television genre consists of three areas that I am going to take apart and discuss saying what is effective, does it have a role on the success of the genre and why is it used? The two areas I'm going to discuss are; Mise-en-Scene and Camera Techniques. The reason I chose these two is because having watched Monday 3rd February's episode, I thought that these three areas seemed to be the most considered when putting the program together, and certainly made me feel about who we are going to have to produce ours carefully. I also feel though that there are several areas of the genre that must be discussed. ...read more.

Yet, as the interview progressed, the camera started to go around the victim viewing different body parts. One good example of shot during the interview was the one from behind the victim showing just the back of their shoulders and hair. This camera angle to me looked brilliant because it really started to give you the feelings of the character rather than just sat staring at the victim, face on. Interestingly though in this interview we never saw an interviewee or another camera man which all add to the feeling of loneliness felt by the victim I felt. This worked well but also there was a different side to this that was completely different from the victim's interview, and this took place in the expert's interview. In the case of the experts interview it is quite safe to show their face, unlike the victim before. This interview took place in the studio with the expert and the presenter sat near the side of the office set. This made the whole scene seem relaxed taking pressure of the expert and the presenter as well. This was a good scene because we saw the expert and the presenter so you could obviously tell that nothing was required to be kept secret from the viewers. The camera angle in this scene was generally just one view all the time but applying a different technique which was panning all the way through the interview. ...read more.

Just the use of a simple shot like the view say from a CCTV tape can jog peoples memories but things such as the view from a persons eye can be very effective when trying to achieve a investigative view and they work this very well also. The majority of the camera angles in the reconstruction are mid-shots of the people / example of the object involved. In this weeks there was a investigation into beds and their con men on Crimewatch UK on Monday and when interviewing the victim of the con man and his company the camera was focused on the victim but she was sat on the controversial object (being the bed) which was slightly blurred. The producers of the program acted a little like the press I thought because when investigating the con man they were chasing him down the road on foot like the press do and I thought this just proved that getting all the information is not easy. Evaluation Overall I think that Crimewatch UK was a great example of the type of genre we wish to be successful at with our production. It had it all that is should include with such things as your presenters (obvious!), the reconstructions and out of studio investigations and of course the mise-en-scene was thorough and they made you see what they really wanted you to see. Darren Gladstone 13C Miss Scott Initial Research ...read more.