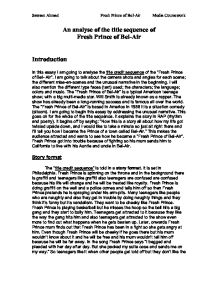 analyse of title credit sequence of Fresh Prince of Bel-Air

An analyse of the title sequence of Fresh Prince of Bel-Air Introduction In this essay I am going to analyse the title credit sequence of the "Fresh Prince of Bel- Air". I am going to talk about the camera shots and angles for each scene; the different mise-en-scenes and the unusual narrative in the beginning. I will also mention the different type faces (text) used; the characters; the language; colors and music. The "Fresh Prince of Bel-Air" is a typical American teenage show; with a big multi-media star. Will Smith is already known as a rapper. The show has already been a long-running success and is famous all over the world. The "Fresh Prince of Bel-Air" is based in America in 1988 it is a situation comedy (sitcom). I am going to begin this essay by addressing the unusual narrative. This goes on for the whole of the title sequence. It explains the story in RAP (rhythm and poetry). It begins off by saying: "Now this is a story all about how my life got twisted upside down, and I would like to take a minute so just sit right there and I'll tell you how I became the Prince of a town called Bel-Air." This makes the audience attracted and wants to see how he became a "Fresh Prince of Bel-Air". ...read more.

Fresh Prince Acts cool, he's funny and makes people laugh, he is rebellious and shows off, he is also very brave and confident and he always smiles a lot. Therefore, teenagers like people who are brave and also like people who smiles a lot. Teenagers get attracted to the way he acts, what he wears, his hairstyle and his personality so teenagers want to be like him. Fresh Prince Values and interests are his mum because he's obedient to her, his friends, anti-authority, sport and loves to rap and graffiti. Music The reason the "title credit sequence" was a success is because of the music. The music rhymes and also the story are told in the music and people can understand it clearly. Fresh Prince uses slang words like "Yo, chillin out, maxin, relaxin and shootin and also these words rhyme. It's a catchy rhythm it has a strong beat and its drum and base style. The lyrics are easy to remember because they are rhyming couplet used like maxin, relaxin which rhymes. In the music the voice changes and the role changes because they show when Fresh Prince mum comes nagging at him. The genre of the music is aimed at teenagers it's like ghetto music and cult. These features attract teenagers because the music is fast it rhymes it has a strong beat and teenagers like to think of themselves as quick because the rush towards most of the things. ...read more.

Teenagers are interested in this significant mansion because they like big mansions and they want to see how it looks inside. Font The reason the "title credit sequence" was a success is because of the font. They show the font after a few shots and it appears in the centre and the audience gets attracted to the font and color because the font "Fresh Prince of Bel-Air" is large and the color is fluorescent, luminous green and baby pink. They have typed in a graffiti style and it's targeted to teenagers. The font and color they used for "Fresh" is very big the color they used is luminous green and the background is all pink and that stands out. Graffiti is crime and its ghetto, the font and color of "Bel-Air" size is small and it is typed in italics or a different type. The color they used for "Bel-Air" is aqua blue so it looks attractive and teenagers like the colors they used. Conclusion This show has been a success and it is famous all over the world. The "title credit sequence" attracted the audience and this made them to watch it because they wanted to know how he landed up living in Bel-Air. I hope they keep on making new series of "Fresh Prince of Bel-Air" because many teenagers like it and it made people show what Black people can do as well. ?? ?? ?? ?? Sawsan Ahmad Fresh Prince of Bel-Air Media Coursework ...read more.