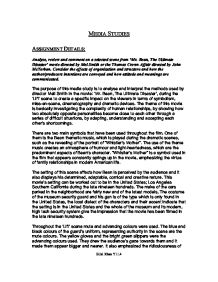 Analyse, review and comment on a selected scene from 'Mr. Bean, The Ultimate Disaster' movie directed by Mel Smith or the Thomas Crown Affair directed by John McTerban.

MEDIA STUDIES ASSIGNMENT DETAILS: Analyse, review and comment on a selected scene from 'Mr. Bean, The Ultimate Disaster' movie directed by Mel Smith or the Thomas Crown Affair directed by John McTerban. Consider the effects of organization and structure and how the author/producers intentions are conveyed and how attitude and meanings are communicated. The purpose of this media study is to analyse and interpret the methods used by director Mell Smith in the movie: 'Mr. Bean, The Ultimate Disaster', during the 'Lift' scene to create a specific impact on the viewers in terms of symbolism, miss-en-scene, cinematography and dramatic devices. The theme of this movie is basically investigating the complexity of human relationships, by showing how two absolutely opposite personalities become close to each other through a series of difficult situations, by adapting, understanding and accepting each other's shortcomings. There are two main symbols that have been used throughout the film. One of them is the Bean thematic music, which is played during the dramatic scenes, such as the revealing of the portrait of "Whistler's Mother". ...read more.

This highlights the unusual personality of Mr. Bean and his unorthodox ways of doing things. Any other thief would not prefer the same type of equipment as Mr. Bean's. The lighting intensity during this scene remained low key and most of the screen was set in shadows. The effect of this was the creation of an atmosphere of suspense by leaving a contrast between dark and light objects on the screen. The direction of the lighting was generally from the front and there was also the frequent spotlight on the characters. The spotlight on the character's faces gave the audience a clear view of their faces, a childish look of amusement and concentration on Bean's face provides a humorous effect in contrast to the worry, desperation and anger on the guard's face. The quality of light remained balanced to diffuse. During the approach scene outside the museum, there was low key and soft lighting from the street lights. ...read more.

It shows that he's thinking about something and has got an idea which then creates a certain amount of tension. The long shot of the Museum cross-section gives a humorous and comical effect. It also adds dramatic/ironic effect to the humour. The high angle of Bean on the skateboard creates skepticism amongst the audience and draws attention to his vulnerability about Bean actually being able to use the skateboard and creates disbelief. There has also been the use of a variety of sounds, including visible and invisible sounds. The visible sound comes from the skateboard and the invisible sound comes from Bean calling the guard for help. The music has been made to fit in with the action and it used when the guard and Bean are running parallel to each other and Bean starts to prepare the picture/poster. It heightens the audience's awareness of the situation and the character's movement. Through effective use of camera angles, lighting, colour, costumes and sound, Smith has been able to manipulate the scene to create extra humorous and theatrical effects on the audience and their reaction to Bean's ridiculous actions. Bilal Khan Y11.4 ...read more.