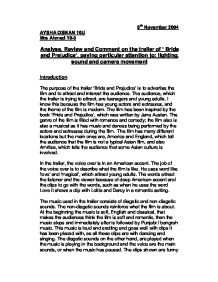 Analyse, Review and Comment on the trailer of ' Bride and Prejudice', paying particular attention to: lighting, sound and camera movement

8th November 2004 AYSHA OSMAN 10U Mrs Ahmed 10-3 Analyse, Review and Comment on the trailer of ' Bride and Prejudice', paying particular attention to: lighting, sound and camera movement Introduction The purpose of the trailer 'Bride and Prejudice' is to advertise the film and to attract and interest the audience. The audience, which the trailer is trying to attract, are teenagers and young adults. I know this because the film has young actors and actresses, and the theme of the film is modern. The film has been inspired by the book 'Pride and Prejudice', which was written by Jane Austen. The genre of the film is filled with romance and comedy; the film also is also a musical as it has music and dances being performed by the actors and actresses during the film. ...read more.

This music is loud and exciting and goes well with clips it has been placed with, as all these clips are with dancing and singing. The diagetic sounds on the other hand, are played when the music is playing in the background and the voice are the main sounds, or when the music has paused. The clips shown are funny yet romantic, as the accents of particular actors are hilarious, such ands the clip of conversation between Mrs Bhakshi and Mr Kholi. There are many different techniques of lighting used in the trailer. The high key lighting shows the realistic lights, such as the use of natural light, used in the clip where Darcy and Lolita are outside at night having a conversation. The natural darkness creates a romantic atmosphere in the trailer and to the audience. ...read more.

The ranges of camera angles used in the trailer are long shot, medium shot and close-up. Long shot is used when During the trailer, we are informed that the film is about the main character, Lolita, and she has three choices of men who she could marry. She has her first choice, her last choice and her mum's choice. We are not informed of whom she chooses which is another persuasion to go and watch the film to find out whom she does end up with. The film does reach its target audience, as an elder person would prefer a more serious film depending on their likes and dislikes. I think that the trailer is very effective and it would most certainly persuade me to go and watch it. The ways in which the film is most effective is, the comedy, romance and cultural scenes given in the trailer. I think this because it's the reason it reaches its target audience and it is very persuasive. ...read more.