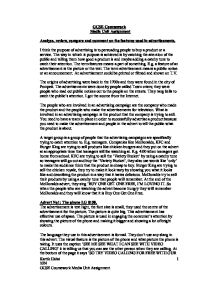 Analyse, review, compare and comment on the features used in advertisements

GCSE Coursework Media Unit Assignment Analyse, review, compare and comment on the features used in advertisements. I think the purpose of advertising is to persuading people to buy a product or a service. The way in which is purpose is achieved is by catching the attention of the public and telling them how good a product is and maybe adding a catchy tune to catch their attention. The term features means a part of something. E.g. a feature of an advertisement is the picture or the text. The term advertisement means a public notice or an announcement. An advertisement could be printed or filmed and shown on T.V. The origins of advertising were back in the 1700s and they were found in the city of Pompeii. The advertisements were done by people called Town criers; they were people who read out public notices out to the people on the streets. They rang bells to catch the public's attention. I got the source from the Internet. The people who are involved in an advertising campaign are the company who made the product and the people who make the advertisements for television. ...read more.

The picture is quite big. This advertisement has effective use of space. The picture is used in engaging the consumer's attention by showing the picture of the phone and making it bigger and showing a lot of bright colours. The language they use in this advertisement is formal. They don't use any slang in this advert. The visual feature is the picture of the phone and what picture the phone is taking. It uses the caption 'SEE ME SEE WHAT I CAN SEE WITH VIDEO CALLING' it is telling us that you can see the other person when they are calling. At the bottom of the page it says 'SO TRY VIDEO CALLING FOR FREE WITH OUR NEW EXCLUSIVE LG U8150 HANDSET' they are giving you the chance to try out something and not pay for it. They also say 'new exclusive' which makes it sounds like it is a very good phone. The message that is being conveyed is that you should try out video calling. The nature of this advertisement is to sell the phone. ...read more.

There is a caption that says 'HAPPY FAMILIES EVERYWHERE HAVE ALREADY SAVED UP TO 50%.' They are telling us that because they want us to fell that we also can save money just like everyone else who has tried it out and those families that have tried out the service saved a lot of money. There is also another caption that says 'PLEASE ALWAYS CHECK THE SMALL PRINT IN OTHER ADVERTS.' They put that in the advert because usually advertisers put in things that they don't want the audience to know but they have to put in so the audience knows that this advertisement has no catches; they don't have a small print at the bottom of the page. The nature of this advertisement is to sell loans. The target group for this service is for families who need quick money. It suggests that the target group wishes to have more money if they are in a financial problem. I have learnt that in advertising, you use catchy slogans and captions to catch people's attention and they use pictures to show what they are trying to tell you and they use big, bold writing to grab your attention. 1 Kartik Halai 10N GCSE Coursework Media Unit Assignment ...read more.