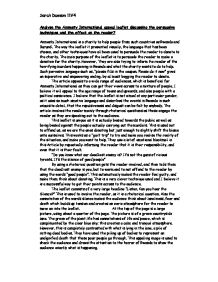 Analyse the Amnesty International appeal leaflet discussing the persuasive techniques and the effect on the reader?

Analyse the Amnesty International appeal leaflet discussing the persuasive techniques and the effect on the reader? Amnesty International is a charity to help people from such countries as Rwanda and Burundi. The way the leaflet it presented visually, the language that has been chosen, and other techniques have all been used to persuade the reader to donate to the charity. The main purpose of the leaflet is to persuade the reader to make a donation for the charity. However, They are also trying to inform the reader of the horrifying murders happening in Rwanda and what the charity wants to do to help. Such pervasive language such as, "please fills in the coupon. Please do it now" gives an imperative and empowering ending, by all most begging the reader to donate. The article appeals to a wide range of audiences, which is beneficial for Amnesty International as they can get their views across to a mixture of people. I believe it will appeal to the age range of teens and upwards, and also people with a political conscience. I believe that the leaflet is not aimed at any particular gender, as it uses so much emotive language and describes the events in Rwanda in such exquisite detail, that the repulsiveness and disgust can be felt by anybody. ...read more.

This makes the audience feel comforted, like they are helping people in danger by calling the number. It also includes the price of the calls, which is in very small font, as they don't want to put off the reader with prices. The actual text is set out in columns with subheadings; this breaks up the sections to slow down the article, therefore creating tension. The word "silence" is continually repeated in the sub-headings, to draw the reader's attention back to horror and fear. The leaflet makes the audience feel included and personally involved. It begins with a very calm atmosphere, which describes travelling along a green English Meadow. This is followed with a contrasting change. They describe "one, two, four then more and more. Hundreds of dead people in the green grass. Far above you, summer clouds in a perfect sky". This is used to shock the reader as it's spoken in such a casual tone; the counting of bodies creates a rhythm and draws attention to how many were actually killed. There is a juxtaposition of dead people and green grass, as these have connotations of death and life. This dramatic way of beginning the article draws the reader in and leaves them feeling shocked, disgusted and urges them to read on. ...read more.

The article contains statistics for how long the massacres have been going on for. "There were massacres in Rwanda in 1990, 1991, 1992, and 1993. In Burundi in 1965, 1969, 1972, 1986 and 1991." By showing the reader all the dates exaggerates how long it's really been going on for. It leaves the reader feeling amazed and makes them think about what they can do to help. The article uses many imperatives. "Hush. Don't even breathe. Don't let this page rustle" This is used to again grab the attention of the reader and to slow down the rhythm of the shocking events being foretold. The layout, pictures used, headings and visual effects are used to draw the reader in and to attract them to the leaflet. Once the leaflet has grabbed their attention, they must persuade them to donate, this is through language techniques. They use a lot of persuasive writing, statistics, emotional blackmail, rhetorical questions, repetition, and describe the events in such extensive detail. On the whole, the leaflet leaves the reader feeling guilty and makes them want to help. This could lead them into donating, or even just making them find out more about the actual charity. It informs the reader of what's going on, for how long its been going on, and who is responsible. Overall, the leaflet achieves its main purpose by using persuasive techniques. ?? ?? ?? ?? Sarah Dawson 11V4 ...read more.