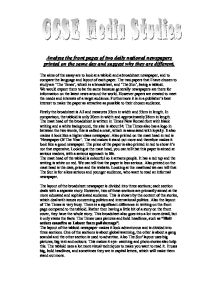 Analyse the front pages of two daily national newspapers printed on the same day and suggest why they are different.

Analyse the front pages of two daily national newspapers printed on the same day and suggest why they are different. The aims of the essay are to look at a tabloid and a broadsheet newspaper, and to compare the language and layout of each paper. The two papers that I have chosen to study are 'The Times', which is a broadsheet, and 'The Sun', being a tabloid. We would expect them to be the same because generally newspapers are there for information on the latest news around the world. However papers are created to meet the needs and interests of a target audience. Furthermore it is in a publisher's best interest to make the paper as attractive as possible to their chosen audience. Firstly the broadsheet is A2 and measures 35cm in width and 55cm in length. In comparison, the tabloid is only 30cm in width and approximately 38cm in length. The mast head of the broadsheet is written in Times New Roman font with black writing and a white background, the size is about 24. The Times also has a logo in between the two words, this is called a crest, which is associated with loyalty. It also makes it look like a higher class newspaper. Also printed on the mast head in red is 'Newspaper Of The Year'. The red makes it stand out more and therefore makes it look like a good newspaper. The price of the paper is also printed in red to show it's not that expensive. ...read more.

Underneath is says "times2", this means it is in the booklet that is included in The Times. The articles in The Times are discussed more in depth. The numbers of articles on the tabloid are only two. The tabloid newspaper has very little written down in terms of language and content. The downpage has a big, bold heading, making it stand out, "Daylight Yobbery". This is known as a crosshead. The article has a mug shot picture of a woman next to it, which has been cropped. The article is at the bottom left of the paper, and it is also continued onto another page. The other article is running down in a column on the left hand side, in small writing. It is about global warming, and the heading says "Global Warning". You can tell that this paper is less serious, due to the heading. However, there are no full stories on the front page, therefore they both say continued onto other pages. Moreover, the use of colour used on the broadsheet is very plain. Although The Times has not got that much colour in it, apart from the picture of the boy, it is not a newspaper that needs to be attracted. The font used for The Times is mainly Times New Roman, even for the sub-headings and articles. The use of colour used on The Sun is very bright and eye-catching. The colour that is mostly used is red because this is really bright, and makes people attracted to it. ...read more.

These are mainly a younger and uneducated audience. Also the language is chatty. The headline on The Sun says "Daylight Yobbery", which is a word play because the actual phrase is daylight robbery. Furthermore, this tabloid also uses exaggeration, as it says on the paper, "New Gangs Scandal". There isn't actually a new gangs scandal. The use of idiomatic expression is also used in an article on the front page. An example of this is "standing up". Lastly, The Sun also has slang words in the same article, examples of these are "cops, mum, gobs, and tearaways." In conclusion to this essay I think that over all, the tabloids and the broadsheet have major differences, such as the size or amount of text written and the amount of pictures used. However, the language is very different as the broadsheet uses longer, more complex words than the tabloid that uses shorter, simpler words. This is because of the type of people that read them, as the people that read broadsheets are generally more intellectual, whereas the people that read tabloids are more of a younger and uneducated audience. The tabloids have a large content of celebrities and gossip, which is very different to broadsheets. Broadsheets have international and national news and not as much written about celebrities and gossip. The broadsheet also tells the truth and gives both opinions of the story, unlike the tabloid which is exaggerated to make it more exciting and only gives the opinion of the story they want you to see. Therefore the tabloid is a lot more biased than the broadsheet. ?? ?? ?? ?? ...read more.