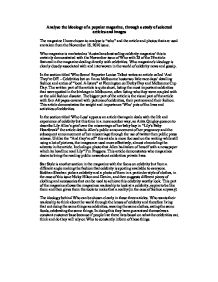 Analyse the ideology of a popular magazine, through a study of selected articles and images The magazine I have chosen to analyse is who and the article and photos that are used are taken from the November 15, 2010 issue.

Analyse the ideology of a popular magazine, through a study of selected articles and images The magazine I have chosen to analyse is "who" and the article and photos that are used are taken from the November 15, 2010 issue. Who magazine is marketed as 'Australians best-selling celebrity magazine' this is certainly demonstrated with the November issue of Who with 25 of the 29 article featured in the magazine dealing directly with celebrities. Who magazine's ideology is clearly closely associated with and interwoven in the world of celebrity news and gossip. In the section titled 'Who Scene' Reporter Louise Talbot writes an article called 'And They're Off! ...read more.

In the section titled 'Who Loss' appears an article that again deals with the life and experience of celebrity but this time in a more somber way, as Anita Quigley goes on to describe Lily Allen's grief over the miscarriage of her baby boy in "Lily's Baby Heartbreak" the article details Allen's public announcement of her pregnancy and the subsequent announcement of her miscarriage through the use of twitter then public press release. Unlike the "And they're off" this article is more focused on the writing while still using a lot of pictures, the images are used more effectively, almost chronicling the advents in the article. Including a photo that Allen had taken of herself with a newspaper which its headline read Lily" I'm Preggers. ...read more.

This part of the magazine allows the magazines readership to look at a celebrity, aspire to be like them and then gives them the tools to make that a reality (in the case of fashion anyway) The ideology behind Who can be shown clearly in these three articles. Who wants their readership to think about the world through the lenses of celebrity and therefore living that out doing the same things as celebrities, wearing the same clothes, eating the same foods, celebrating the same things. In doing this they have guaranteed themselves a constant customer base because if people live there lives based on what the celebrities eat, think and do they will rely on Who to constantly inform of these things. ...read more.