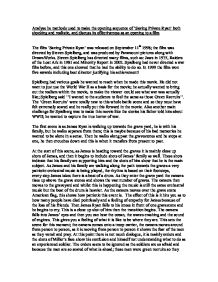 Analyse the methods used to make the opening sequence of 'Saving Private Ryan' both shocking and realistic, and discuss its effectiveness as an opening to a film

Analyse he methods used to make the opening sequence of 'Saving Private Ryan' both shocking and realistic, and discuss its effectiveness as an opening to a film The film 'Saving Private Ryan' was released on September 11th 1998; the film was directed by Steven Spielberg, and was produced by Paramount pictures along with DreamWorks. Steven Spielberg has directed many films, such as: Jaws in 1975, Raiders of the Lost Ark in 1981 and Minority Report in 2002. Spielberg had never directed a war film before, and this one showed that he had the ability to do so. In 1999 the film won five awards including best director justifying his achievement! Spielberg had various goals he wanted to reach when he made this movie. He did not want to just use the World War II as a basis for the movie; he actually wanted to bring out the realism within the movie, to make the viewer could see what war was actually like; Spielberg said ''I wanted to the audience to feel the same as those Green Recruits''. The 'Green Recruits' were totally new to this whole battle scene and so they must have felt extremely scared and he really put this forward in the movie. ...read more.

Now that a lot of men have made it onto the beach Spielberg shows a different point of view, the cameras are sat behind the gattling guns of the Germans, the Germans killing the American troops like flies and this shows us the inevitability of death and then going on to showing pan shots of the beach showing the vast pointless death. Then it goes back to the men on the beach, the men are using handheld cameras as they move onto the beach showing you the rough terrain they faced. Throughout this scene they face an onslaught of bullets and such great loss. The scene shows us Captain Miller's confusion. In this scene Miller and his men have made it onto the beach. Captain Miller staggers along the beach and then stumbles; he sits in this position observing the things that is going on around him. At the beginning of this scene the cameras are taking close up shots of Miller, this helps us see his expressions so we can see the way he is feeling and his expressions show a confused mind. Then we begin to see shots of other people's deaths from Miller's perspective, it shows mass death and the confusion of other soldiers as they die. ...read more.

The camera then begins to soar across the beach showing how many people were dead. There was melancholy music as it did so, the camera lowered and show men with no legs and the blood red sea. This is a very tragic feeling then the camera moves up to a man and on his back it says 'RYAN', reflecting the name of the movie as it is called 'Saving Private Ryan' but he is dead so early on. In conclusion. The opening establishes that war is not glamorous. Spielberg does this by showing the sorrow of James Ryan by showing close up shots of his face and as he proceeds to the graves tears fill his eyes. Also Spielberg uses handheld cameras; this shows how rough the terrain was and the jolting and jerking of the cameras showed the difficulty of getting the beach and also the sound as the soldiers move up the beach is the sound of gattling cannons and artillery fire. And finally Spielberg achieves all of his goals in this moving by not storing boarding the feature, him not storyboarding it greatly contributes to the way the opening sequence goes on, it emphasises the events and how they can totally go a different way, from winning to losing and life to death. ...read more.