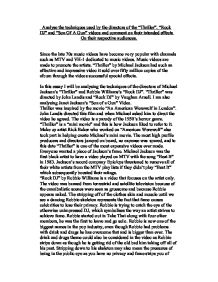 Analyse the techniques used by the directors of the &quot;Thriller&quot;, &quot;Rock DJ&quot; and &quot;Son Of A Gun&quot; videos and comment on their intended effects On their respective audiences.

Analyse the techniques used by the directors of the "Thriller", "Rock DJ" and "Son Of A Gun" videos and comment on their intended effects On their respective audiences. Since the late 70s music videos have become very popular with channels such as MTV and VH-1 dedicated to music videos. Music videos are made to promote the artists. "Thriller" by Michael Jackson had such an effective and impressive video it sold over fifty million copies of the album through the videos successful special effects. In this essay I will be analysing the techniques of the directors of Michael Jackson's "Thriller" and Robbie Williams's "Rock DJ". "Thriller" was directed by John Landis and "Rock DJ" by Vaughan Arnell. I am also analysing Janet Jackson's "Son of a Gun" Video. Thriller was inspired by the movie "An American Werewolf in London". John Landis directed this film and when Michael asked him to direct the video he agreed. The video is a parody of the 1950's horror genre. "Thriller" is a "mini movie" and this is how Jackson liked to refer to it. Make up artist Rick Baker who worked on "American Werewolf" also took part in helping create Michael's mini movie. The most high profile producers and directors jumped on board, no expense was spared, and to this date "Thriller" is one of the most expensive videos ever made. Everyone wanted a piece of Jackson's fame. ...read more.

things are now fine, this is done by using bright lighting and being in a place of "normality" and the worst is over but as Michael turns his head to show his eyes and the laugh of Vincent Price starts it leaves a twist to the end of the video. The dark atmosphere reflects the song it talks about ghouls and things out to get you, it wouldn't be right to have a happy bright video, the lighting reflects the words of the song. This setting suits the type of music video it is. Lighting is the best creator of atmosphere; you can tell by the tone of light what the mood of the video is. The target audience for the video is really for older viewers as it may scare younger people. The Video for "Rock DJ" is different from "Thriller" it still may be for older people it doesn't give the eerie feeling. It is quiet a funny video with a bit of comedy in it by the way he shows himself off. It is like he is in a cattle ring he's the meet in the middle and he's trying to find a buyer. The DJ makes all the decisions on whether to see him or not or acknowledge his presents. The mood of the song is a happy feeling, it is a dance song with a good video to sell the song. ...read more.

It sometimes skips to the DJ dancing up above and the female skaters around him but the main focus is Robbie. When Robbie is taking his clothes off the camera follows the movements he makes so it makes you relate to what he is doing. The director makes you want to feel close to Robbie by doing close ups. The editing is very fast, in time with the beat of the music, there are many jump cuts again representing the type of jumpy song that it is. "Son Of A Gun" is a great video with a range of special effects from spiders appearing out of the mans mouth from him being possessed by the wishes of Janet making him punch himself. Close up shots are a favourite on this video and there is a lot of camera action it feels like it is never still. Tracking, panning and tilting is all used throughout some point in the video. This gives you the feeling of excitement and confusion at the same time, which is a good combination to get an audience intrigued. The directors of these videos use camera angles and movement to focus on the artists. Make-up, costumes, sound and lighting are used to relate the video to the song as well as they can be. The better the music video the more it encourages people to go out and by the single and feel like they know the artist on a personal level. Written by Carly Turnbull ...read more.