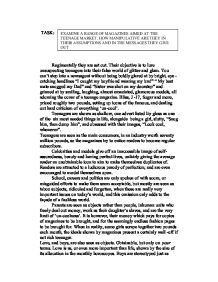 TASK: Regimentally they are set out. Their objective is to lure unsuspecting teenagers into their false world of glitter and glam. You can't step into a newsagent without being boldly glared at by bright, eye-catching headlines "I caught my boyfriend wearing my bra!" " My best mate snogged my Dad" and "Sister was shot on my doorstep" and grinned at by smiling, laughing, almost emaciated, glamorous models, all adorning the cover of a teenage magazine. Bliss, J-17, Sugar and more, priced roughly two pounds, setting up icons of the famous, and dealing out hard criticism of everything 'un-cool'. Teenagers are shown as shallow, one advert listed lip gloss as one of the six most needed things in life, alongside being a girl, slutty, "Snog him, then dump him", and obsessed with their images, "Look cool, whenever". Teenagers are seen as the main consumers, in an industry worth seventy million pounds, so the magazines try to entice readers to become regular subscribers. ...read more.

Love, and boys, are also seen as objects. Obtainable, but only on your terms. Love is as, or even more important than life, shown by the size of its allocation in the monthly horoscopes. Boys are stereotyped just as much as girls, and are seen as items to drape over the fashionable young female's arm, to be bent to their will, and then dumped once they cease to amaze one, or perform one the sexual side of things. However, if this where true, surely there wouldn't be so many problem pages and letters titled such as "He says he'll hit me if I don't do as he says", or "He says he will dump me if I don't sleep with him", where exclusively for a few scant pages in this girl power propaganda, boys are dominating scumbags. Sex, support of, and caution against, conflict across the glossy pages. ...read more.

Alliterations litter the pages, along with similes and metaphors. Slang is used liberally, and several words such as 'totty', 'slap-happy' and 'vampish', spring up amongst "Smug sistas', 'cleavage queens' and 'needy chicks' Magazines are giving teenagers what they have been trained by previous issues to want and think they need. They are manipulating and hindering teenagers, in their beliefs and lives,. They assume, wrongly, that all of 'girl kind' want to be the same., and do not even address alternatives lifestyles, except to ridicule and ostracize them. Magazines are becoming more and more risqu�, indulging in speculation and addressing less and less of the real problems of the world teenagers are having to grow up in. They are suited more to what adults think teenagers are like, and what they desire, and a stereotype of typicality, than to those who pay their pocket money out each month, to see behind the glossy front covers, read and gasp in adoration and wonder, feel for the "real-life stories" and laugh at mishaps. All they are really doing is limiting, destroying and suppressing their true selves. ...read more.