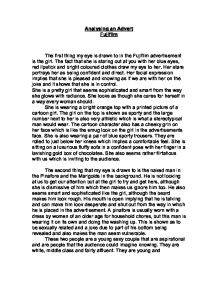 Analysing an Advert Fujifilm The first thing my eye is drawn to in the Fujifilm advertisement is the girl. The fact that she is staring out at you with her blue eyes, red lipstick and bright coloured clothes draw my eye to her. Her stare portrays her as being confident and direct. Her facial expression implies that she is pleased and knowing as if we are with her on the joke and it shows that she is in control. She is a pretty girl that seems sophisticated and smart from the way she glows with radiance. She looks as though she cares for herself in a way every woman should. She is wearing a bright orange top with a printed picture of a cartoon girl. The girl on the top is shown as sporty and the large number next to her is also very athletic which is what a stereotypical man would wear. The cartoon character also has a cheeky grin on her face which is like the smug look on the girl in the advertisements face. She is also wearing a pair of blue sporty trousers. They are rolled to just below her knees which implies a comfortable feel. She is sitting on a luxurious fluffy sofa in a confident pose with her finger in a lavishing gold box of chocolates. ...read more.

It is bland and innuendo which is almost like a carry-on-film or a dirty joke from the shop on the end of the pier. On the other hand the s****l innuendo is friendly and doesn't offend as it is relatively subtle. The copy is implying that you can keep staying in 'rich and tasty'. However 'rich and tasty' sounds more like a chocolate advertisement than a camera film advertisement. The font used for the copy is spaced out and snappy as if it were a camera snapping and taking picture after picture. The fourth thing that my eye is drawn to is the surroundings. The lounge is in pastel colours to show comfort. The sofa is glamorous and sumptuous which implies that the couple have money and take pride in their home. The kitchen looks cheap and industrial due to the stark white colour of the walls and the cabinets which contrast the living room. In the kitchen the man is holding a kitchen utensil which is silver, round and dull and wiping it with a grey cloth, compared to the girl who is holding a gold, rich and luxurious box of chocolates. Both of these objects contrast the different areas of the flat. Also in the kitchen there is a Sharp microwave, this implies that Fujifilm when put with Sharp is an established company like Sharp in an indirect manner or it could be said that it is an advertisement within an advertisement. ...read more.

The actual product has no image given due to it is only ineffectively tagged on in a small picture in the bottom right-hand corner, as if they thought of the picture and then the product to go on to it - therefore, the product doesn't seem to tie in very well with the overall picture. Furthermore, it seems as though the advertisement could have been used for any product, and the decision to use it for Fujifilm could almost be an afterthought. Overall, the image the advertisement is striving to be associated with is a strong, fun, female market - the exact reputation that the magazine holds. The impression is one of a modern, easy-to-use and spontaneous product that is accessible to younger generations. I feel that this is a mediocre advertisement, in which the advertisers took the easy, obvious option of the stereotypical prototype that they think young woman want to see, but in reality this advert has little effect on the audience and would be easily passed by skimming through a magazine. From analysing this advertisement and working on advertising I have learnt that advertisements are much more than just pages to fill up a magazine. I now look at adverts in detail than just skimming through and not paying much attention to it and it teaches me that some adverts have no meaning and others are full of significance. In short, this task has made me do exactly what the advertisers intended - notice their adverts. ...read more.