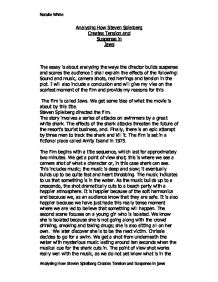 Analysing How Steven Spielberg Creates Tension and Suspense in Jaws

Analysing How Steven Spielberg Creates Tension and Suspense in Jaws The essay is about analysing the ways the director builds suspense and scares the audience I shall explain the effects of the following: Sound and music, camera shots, red herrings and tension in the plot. I will also include a conclusion and will give my vies on the scariest moment of the film and provide my reasons for this The film is called Jaws. We get some idea of what the movie is about by this title. Steven Spielberg directed the film. The story involves a series of attacks on swimmers by a great white shark. The effects of the shark attacks threaten the future of the resort's tourist business, and. Finally, there is an epic attempt by three men to track the shark and kill it. The film is set in a fictional place called Amity Island in 1975. The film begins with a title sequence, which last for approximately two minutes. We get a point of view shot; this is where we see a camera shot of what a character or, in this case shark can see. This includes music; the music is deep and slow; it eventually builds up to be quite fast and heart throbbing. ...read more.

The scene appears to quieten, but then the yellow bloodstained lilo washes up on the beach, in a high angle shot, which makes the lilo look helpless and vulnerable, as the boy was in the attack. Characters reactions are used to create tension by close ups; you can really see the fear in their eyes. I believe there is only one person we really connect with in this film and that is Brody. He knows something is out in the open water and it will do anything to get its food. In the Alex Kintner attack Brody pays close attention to the water, impelling we do the same. When Alex gets attack we get a close up of Brody and his reaction to the attack, using a contra-zoom. We also get this screeching music. Again showing how the music works well with the camera. The shark shows both strength and perseverance. The shark also has its strength demonstrated during the post mortem when the marine specialist comments that the attack was not frenzied. This implies that the shark was just feeding normally, with a cold blooded killer instinct. This causes more fear in the audience as the shark is remorseless and can kill whom it wishes. The terror is also built on by the characters' reactions to the shark. ...read more.

His friends who did not wear life jackets drowned and consequently died quicker. His story sets us up for something that happens later on in the film. Hopper goes in to the shark cage. We believe he will be safe until he drops the tranquilliser to kill the shark. I believed that Hopper was killed when the shark attacked the cage, leaving Brody to fight the shark and get back to shore alone. I thought the oat was going to sink right at the last minute and Brody would die despite all his brave attempts to kill the shark. The tension really starts to happen here as the shark draws nearer and nearer, Brody's quick thinking and actions helped him to defeat the shark. Steven Spielberg's use of camera angles and shots plus the dramatic and chilling music in a repetitive manner, builds suspense and fear of what will happen next. The final dramatic scene when it almost becomes a battle of mind of muscle (Brody v The shark) Is a truly brilliant piece of direction. As history has shown, the effects on the audiences at the horrific scenes in the film, have left a long lasting effect on peoples perception of sharks and fear of swimming in the sea. Natalie White Analysing How Steven Spielberg Creates Tension and Suspense in jaws ...read more.