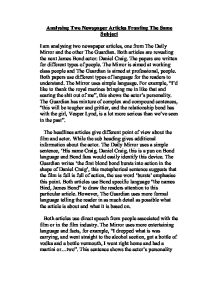 Analysing Two Newspaper Articles Fronting The Same Subject I am analysing two newspaper articles, one from The Daily Mirror and the other The Guardian. Both articles are revealing the next James Bond actor: Daniel Craig. The papers are written for different types of people. The Mirror is aimed at working class people and The Guardian is aimed at professional, people. Both papers use different types of language for the readers to understand. The Mirror uses simple language. For example, "I'd like to thank the royal marines bringing me in like that and scaring the shit out of me", this shows the actor's personality. ...read more.

The Guardian writes 'the first blond bond bursts into action in the shape of Daniel Craig', this metaphorical sentence suggests that the film is full is full of action, the use word 'bursts' emphasise this point. Both articles use Bond specific language "the names Bind, James Bond" to draw the readers attention to this particular article. However, The Guardian uses more formal language telling the reader in as much detail as possible what the article is about and what it is based on. Both articles use direct speech from people associated with the film or in the film industry. The Mirror uses more entertaining language and facts, for example, "I dropped what is was carrying, and went straight to the alcohol section, got a bottle of vodka and a bottle vermouth, I went right home and had a martini or...two". ...read more.

The Daily Mirror's article also entertains the reader as it gives detail about Daniel Craig's love life; it has a lighter tone to it which helps to retain the reader's attention, again responding to the target audience; it contains Bond specific language and talks more the actor's personal life. This article also tells us about the way the actor was brought to the ceremony where as The Guardian doesn't give any personal information. The Guardian discusses more about the actor himself. In conclusion I would prefer to read The Daily Mirror article because it entertaining and, as it uses less formal language and a range of different sentence structures, it is easier to read ...read more.