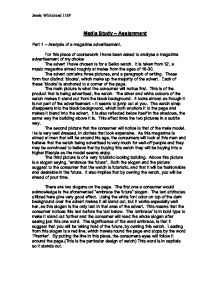 Media Study - Assignment Part 1 - Analysis of a magazine advertisement. For this piece of coursework I have been asked to analyse a magazine advertisement of my choice The advert I have chosen is for a Seiko watch. It is taken from 'Q', a music magazine aimed roughly at males from the ages of 16-30. The advert contains three pictures, and a paragraph of writing. These form four distinct 'blocks', which make up the majority of the advert. Each of these 'blocks' is anchored to a corner of the page. The main picture is what the consumer will notice first. This is of the product that is being advertised, the watch. The silver and white colours of the watch makes it stand out from the black background. It looks almost as though it is not part of the advertisement - it seems to jump out at you. The watch strap disappears into the black background, which both anchors it to the page and makes it blend into the advert. It is also reflected below itself in the shadows, the same way the building above it is. This effect links the two pictures in a subtle way. The second picture that the consumer will notice is that of the male model. He is very well dressed, in clothes that look expensive. ...read more.

The text on this advertisement is laid out in 3 paragraphs. It uses double line spacing, making it look easier to read, and more inviting to read, moreso than a large block of text would. In this text, pseudo science is used to maximize displaying the watches capabilities. The first paragraph is captivating, it reads, "Seiko's forward thinking has created Premier Kinetic Auto Relay as the perfect marriage of design and function". The paragraph is written so that consumers will want to read on and find out more about the watch after hearing that it is a "perfect marriage of design and function". The second paragraph follows up on the first by giving the specific details as to what the watch can actually do. The third paragraph follows on the second by telling you more about the watch. This paragraph ends in a question, "Who says opposites don't attract?" This is a clever ending to the text, as the consumer is asked a question which they have to think about. Below the text, the website address is clearly displayed, along with a telephone number helpline. These are centered to make them look separate to the text above. By giving the consumer two ways of contact, more people will be able to find out about the watch as the information is more accessible. ...read more.

There is one slogan on the advert, primarily found at the top right of the advert. It is suitably situated below the website address. The slogan is a play on words, it says 'strum' instead of 'come', this fits in nicely with the guitar theme. At the bottom of the advert, there is a block of text. This text immediately generates the consumer's interest by asking the question: "Don't we all wish we could play guitar like Matthew Bellamy?" The answer to this question would almost certainly be 'Yes!' The use of a tactical question works well because it requires the consumer to think about an answer to it. After reading this first sentence, the consumer would carry on reading to find out how they can play as well as their idol. The text then continues by plugging the website. At the end of the text, the slogan is repeated, albeit changed slightly, to add emphasis to it. This slogan could be planted into the consumer's subconscious and they would remember it and visit the website at sometime. I believe that this advertisement should be placed in music magazines. The ideal type of magazine would be a guitar one, especially one that has emphasis on learning to play guitar. If the advertisement were placed opposite a feature on Matthew Bellamy, the consumer's interest would already be generated after reading the feature. Jamie Whitehead 11IF ...read more.