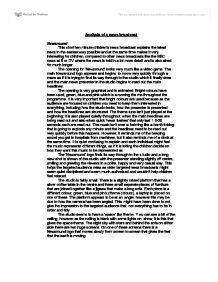 Analysis of a news broadcast

Analysis of a news broadcast Newsround This short ten minute children's news broadcast explains the latest news in the easiest way possible and at the same time makes it very interesting for children, compared to other news broadcasts like the BBC news at 6 or ITV where the news is told in a lot more detail and is also aired for much longer. The opening for 'Newsround' looks very much like a video game. The main Newsround logo appears and begins to move very quickly through a maze as if it is trying to find its way through to the studio which it finally does and the main news presenter in the studio begins to read out the main headlines. The opening is very graphical and is animated. Bright colours have been used, green, blue and pink which is a running theme throughout the programme. It is very important that bright colours are used because as the audience are focused on children you need to keep them interested in everything, including how the studio looks, how the presenter is presented and how the headlines are structured. The theme tune isn't just played at the beginning; it is also played quietly throughout when the main headlines are being read out and also when quick 'news flashes' that only last 10-20 seconds each are read out. ...read more.

This is only a ten minute programme so the pace is very fast which is very important not only to fit in all the main headlines but if it was longer the targeted audience may get bored and not be interested. Ellie welcomes us in a polite and informal way and we get shown quick shots of two main headlines that are going to be discussed in more detail for that evening. The audience get shown a quick shot of another news reporter on location about why he is in Australia and a video clip (library footage of a random person) playing piles of money into a briefcase, while this second clip is shown the main presenter explains quickly what this story is going to be about. The themed music quietly plays in the background and when the second headline is shown the music becomes slightly louder and as it finishes the music comes to a conclusion and finishes. This is all happening very quickly, it is fluent and very fast paced with no pauses. This helps keep the audience interested because they would want to find out more and hear the whole story, like why is the news reporter in Australia? We are now back in the studio, the music has finished and the camera has now slowly moved over and placed the presenter to the far right of out screens. ...read more.

Another reporter, Leezo explains the competition and comments on all the different genre of books there is. Leezo is very enthusiastic and as he explains the different genres he dresses up and performs them with different music placed for each one, e.g. comedy, romance, mystery. This can be seen funny and keeps children interested and wanting to find out more about the competition. Details are shown on screen in an animated form yet again and clips of the prizes that can be won are also shown which makes the views even more enthusiastic about the competition. The final image of Leezo dissolves back to Ellie in the studio and now the camera is at a bird's eye view angle. Ellie keeps eye contact with the camera as it lowers down and shows a medium shot of her. The news broadcast is now being drawn to a close. The final stories are much softer which are important for younger audiences so they don't worry about all the problems in the world and for the programme ending on a positive note, especially with a competition ending the programme, for most viewers their enthusiasm is focused on this leaving everyone in a positive mood. Ellie says goodbye and the music begin, the lights are dimmed, a long shot of the studio is shown with the presenter reading through her papers in her hands and the Newsround logo wipes in to the centre of the screen. ...read more.