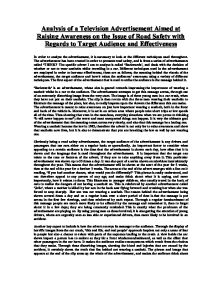 This particular advertisement was shown up to 25 times a day. It was also part of a series shown on television intermittently throughout the year. This means that the advertisement will be shown at the start of the year for 3 weeks, then at the end of the year for a further 3 weeks. The scene at the end of the advert emerges with a line on it reading, 'If you had another chance, what would you do differently?' This phrase is easily understood, and can therefore appeal to any person of any age, and make think about what it is saying, and more importantly, how it relates to them. This illustrates to younger children, who usually travel in the back of cars to realise the dangers of not having a seatbelt on. This is reinforced by another advertisement called 'Julie', where a mother is killed by her son in the back seat flying forward and crushing her when she was forced to stop sharply. Her son was not wearing a seatbelt. ...read more.

The advert uses the language in such a way to prevent the audience from forgetting the advertisement, as well of the image of the pizza that was held by one of the rear passengers being splattered all over the front window a symbol of what has happened to those in the car. It is also used to resemble what happened at the start of the advertisement, helping people to recall the whole of the advertisement. Although the advertisement does use shocking images to make its point, they are used in a very serious and respectful way. The advert is very effective in the ways it targets its audience and gets the message across to them. One way that this advert gets it message across is through the shocking images that it uses. It takes time to change people's attitudes, but that is exactly what this campaign does, makes people think about road safety. The most important aspect of the advert is the thought it evokes. It doesn't force, or tell people what to do; it shows the consequences of such actions. Illustrating the advert's effectiveness, in fulfilling its purpose of raising awareness, and in leaving a lasting message. ...read more.