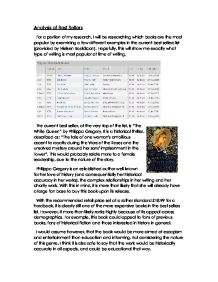 Analysis of Best Sellers For a portion of my research, I will be researching which books are the most popular by examining a few different examples in the current best sellers list (provided by Nielsen BookScan). Hopefully, this will show me exactly what type of writing is most popular at time of writing. The current best seller, at the very top of the list, is "The White Queen" by Philippa Gregory. It is a historical thriller, described as: "The tale of one woman's ambitious ascent to royalty during the Wars of the Roses and the unsolved mystery around her sons' imprisonment in the Tower". This would probably relate more to a female readership, due to the nature of the story. Philippa Gregory is an established author well known for her love of history (and consequentially her historical accuracy in her works), the complex relationships in her writing and her charity work. With this in mind, it is more than likely that she will already have a large fan base to buy this book upon its release. With the recommended retail price set at a rather standard �18.99 for a hardback, it is clearly still one of the more expensive books in the best sellers list. ...read more.

Katie Price herself came to fame as a glamour model, and has since delved into different areas; books, perfumes, endorsements, television shows, etc. This is her latest book, and sizing up to be the most successful having stayed in the best sellers list for 4 weeks in a row so far. This book may also appeal to people more than the best seller because of the price- �12.99- being a full �6 cheaper, and being less expensive than most books on the whole list. And being aimed most typically at teenage girls to young women, I think the story, the price and the name would all appeal to this target audience. The book would also appeal to those who are interested in celebrity culture and scandal. As the book is aptly described, the author does have a keen insight into that world, and so too would those who read the publications she was in (Heat, OK, etc). In fact, as the trend of celeb, paparazzi and gossip grows, so too will the book's popularity. The book itself is published by Arrow Books Ltd, strangely not the publisher listed on the listing itself for any of its publications. ...read more.

However, the advantage this book has is that it is part of an award winning series, the first book of which came out 8 years ago. So as an established series, the readership continually increases over time. According to the author himself from his official website, the book is purely escapist and with minimal research done. Although he did some research (i.e. street names), he focused mainly on the entertainment value and gripping narrative. These qualities make the novel stand out as a more entertaining read than most others. The book is published by Little Brown Book Group, a publisher with a respected standing in all areas of distribution. Their publishing divisions are split into 3 main groups: Literary, Commercial publications and Science-fiction/ Fantasy. The fact that Sci-fi and Fantasy, as genres, have their own publication division devoted to only those sections of fiction, shows that the Little Brown Book Group lean more towards publishing these works than most others. A notable part of this is Virago, which publishes books written only by women. Founded in 1973, it was specifically to showcase feminism and equal rights to women. "Bloodline" is currently published under the hardback fiction part of the Little Brown division, and will subsequently be fed into the Abacus paperback part of the organisation. ...read more.