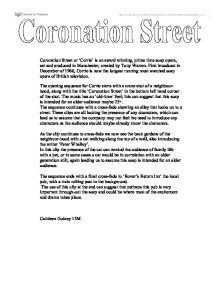 Coronation Street or 'Corrie' is an award winning, prime time soap opera, set and produced in Manchester, created by Tony Warren. First broadcast in December of 1960, Corrie is now the longest running most watched soap opera of British television. The opening sequence for Corrie starts with a crane shot of a neighbour-hood, along with the title 'Coronation Street' in the bottom left hand corner of the shot. ...read more.

The sequence continues with a cross-fade showing an alley that looks on to a street. These clips are all lacking the presence of any characters, which can lead us to assume that the company may not feel the need to introduce any characters as the audience should maybe already know the characters. ...read more.

The sequence ends with a final cross-fade to 'Rover's Return Inn' the local pub, with a train rolling past in the background. The use of this clip at the end can suggest that perhaps this pub is very important through-out the soap and could be where most of the excitement and drama takes place. Cathleen Guiney 13M ...read more.