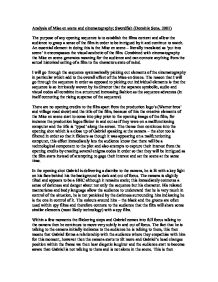 Analysis of Mise en scene and cinematography; Swordfish (Dominic Sena, 2001) The purpose of any opening sequence is to establish the films context and allow the audience to grasp a sense of the film in order to be intrigued by it and continue to watch. An essential element in doing this is the Mise en scene - literally translated as 'put into scene' it encompasses the visual aesthetic of the film. Combined with cinematography the Mise en scene generates meaning for the audience and can connote anything from the actual historical setting of a film to the characters state of mind. I will go through the sequence systematically picking out elements of the cinematography in particular which add to the overall effect of the Mise-en-Scene. The reason that I will go through the sequence in order as opposed to picking out individual elements is that the sequence is so intricately woven by its director that the separate symbolic, audio and visual codes all combine in a structured increasing fashion as the sequence advances (in itself connoting the rising suspense of the sequence) There are no opening credits to the film apart from the production logo's (Warner bros' and village road show) and the title of the film, because of this the creative elements of the Mise en scene start to come into play prior to the opening image of the film, for ...read more.

In this shot we also become more aware of Gabriel's costume a dark suit with a dark green shirt - 'sleek' looking and expensive looking again with the use of green to compliment the background and connote technology and spy/crime genre elements. In the next frame we are aware that there definitely is someone else in the frame as we move to an over the shoulder shot between two silhouettes shoulders who are sitting facing Gabriel across a table (the background is almost completely in focus at this point though still dark which could be because the enigmatic narrative is moving along - the audience no longer care where Gabriel is and are more interested in who he is talking to) we are aware that Gabriel is in control of the situation by his positioning above the other figures in the frame. The frame is also an intertextual 'nod' to 'the godfather' which has been mentioned in the dialogue. The camera continues to move slowly around switching between over the shoulder and shots and closes up all shot on an hhc. Gabriel starts to get more and more animated and extreme close ups of his mouth as seen. The camera then moves back and we start to see the frame in almost complete focus. ...read more.

This high action shot is almost like a crescendo for the audience where all the dangerous element s start slowly moving towards another and building and building until the explosion is imminent thus creating a sense of urgency with in the frame. We then see 'the rescue' where the young girl is dragged away by the S.W.A.T officer as she moves screaming to be let go. The sequence culminates with a series of close ups of Stan, Gabriel and Good Cop screaming let 'her go' promptly followed by a slow motion pan as the girl explodes in the street. We see the cars blown up and bodies slowly moving through the air the action is drawn out visually however it is incongruent with the soundtrack which is not slowed down, this adds a sense of surrealism to the frame indicating that the frame is not in the immediate present of the narrative and soon enough after having seen the last car crash to the floor (in real time) we see a mid shot of Stan on the floor surrounded by Glass, slowly getting up as he gets up a b****y ball bearing rolls towards him. There is a point of view shot of him looking at his reflection in the ball bearing and then the frame fades into the next sequence which we are informed was '4 days earlier' and the narrative continues from there. ...read more.