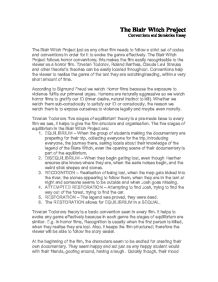 Analysis of The Blair Witch.

The Blair Witch Project Conventions and Semiotics Essay The Blair Witch Project just as any other film needs to follow a strict set of codes and conventions in order for it to evoke the genre effectively. The Blair Witch Project follows horror conventions; this makes the film easily recognisable to the viewer as a horror film. Tzvetan Todorov, Roland Barthes, Claude Levi Strauss and other theorist's theories can be easily located throughout. Conventions help the viewer to realise the genre of the text they are watching/reading, within a very short amount of time. According to Sigmund Freud we watch Horror films because the exposure to violence fulfils our primeval urges. Humans are naturally aggressive so we watch horror films to gratify our ID (inner desire, natural instinct to kill). Whether we watch them sub-consciously to satisfy our ID or consciously, the reason we watch them is to expose ourselves to violence legally and maybe even morally. Tzvetan Todorovs 'five stages of equilibrium' theory is a pre-made base to every film we see, it helps to give the film structure and organisation. The five stages of equilibrium in the Blair Witch Project are: 1. ...read more.

The Blair Witch Project uses Semiotics throughout to create different moods and to define the change from normal life to the horror/documentary/legend life. Roland Barthes was a theorist of Semiology, he noticed the above. The film starts in colour, it reflects reality/normality in their lives at that given point. It also reflects their happiness and excitement. The first black and white scene is the opening scene of their documentary which is set in a cemetery, it evokes uncertainty and a morbid/eerie feeling to the scene, which is what they were trying to create. The students went into the woods to shoot a documentary about the legend of the Blair Witch, but they end up becoming part of it this is shown by using more and more black and white nearer the end of the film, this works because it creates the un-known, not knowing what colour things are is naturally frustrating for us, so it makes us uncomfortable watching it. We tend to associate black with death and white with purity, so this colour reflect the purity and innocence of the young students and then the torment and frustration and finally the anger they went through. ...read more.

When the first character gets murdered, there are a series of clues before hand, usually only the main character believes that something bad is going to happen and the rest just discard it thinking its strange but nothing serious. Also the murders happen near the group or action, making it more frightening thinking that someone can get murdered so close without anyone noticing until it's too late. Josh in The Blair Witch Project was the one that Heather and Mike were arguing with, he wasn't taking the situation serious and he was the most immature, he also was killed close to Heather and Mike. So that Heather and Mike would hear and try to look for him, maybe the villain knew that they would end up at the house eventually. The main character in horror films is usually a young female, who leads her friends/group into trouble causing some of them to be killed. Horror films use the stereotype that women are weak and not good leaders. The characters are usually youths, this is because horror films tend to be aimed at teenagers and having the characters similar ages allows the viewers to put themselves in that position making the film even more frightening. ...read more.