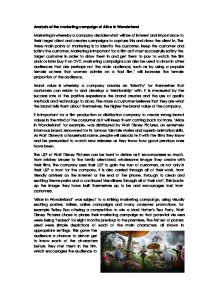 Analysis of the marketing campaign of Alice in Wonderland

Analysis of the marketing campaign of Alice in Wonderland Marketing is whereby a company decides what will be of interest and importance to their target client and creates campaigns to capture this and draw the client in. The three main points of marketing is to identify the customer, keep the customer and satisfy the customer. Marketing is important for a film as it must successfully satisfy the target customer in order to draw them in and get them to pay to watch the film and/ or later buy it on DVD. Marketing campaigns can also be used to draw in other audiences that are perhaps not the main audience, such as by using a popular female actress that women admire on a 'lad film,' will increase the female proportion of the audience. Brand value is whereby a company creates an 'identity' for themselves that customers can relate to and develop a 'relationship' with. It is measured by the success rate of the positive experience the brand creates and the use of quality methods and technology to do so. ...read more.

The first set of posters used were simple depictions of each of the main characters, all shown in appropriate settings. This gave the audience a chance to almost get to know each of the characters before they met them in the film, which encourages the audience to build a 'relationship' with their favourites and least favourites. The next set of posters put the characters into the world we see them in in the film. Cleverly, it was chosen that Johnny Depp's character, the Mad Hatter should be centre, which would have been a major draw for those that had seen and admired him in films like 'Pirates of the Caribbean' and also 'Edward Scissorhands,' another film by 'Alice in Wonderland's' director, Tim Burton. By showing the film's world, it also introduced audiences to the beautiful animations they would later see in the film and get an idea of the world they could expect. The first trailer Disney released showed Alice falling down the rabbit hole and included brief introductions to each of the main characters. ...read more.

By using cross promotions, 'Alice in Wonderland' hype was spread right through the world, through things like fashion designers using Alice as inspiration, OPI releasing a limited edition set of Alice nail polishes and a iPhone campaign, leading to a mini site with many exclusive extras. Things like this can be extremely beneficial for a movie campaign, as people feel like they are buying into a part of the film, and therefore feel more a part of it. The more one feels 'at one' with a movie, the more likely they are to buy into its consumer culture. The two major USPs of the marketing campaign for 'Alice in Wonderland' were clearly Johnny Depp as the Mad Hatter, hence him being the centre of both trailers and many of the visual campaigns, and also the immersion of oneself in the world Burton has created for Alice and her friends, which it does via the trailers and the beautifully designed posters. All of the marketing materials used are also fairly straightforward in that there is no confusion as to what one is looking at, yet they are still mysterious enough for viewers to keep guessing about the film and characters, meaning it is overall very successful. ...read more.