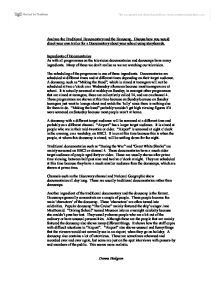 Analyze the Traditional Documentary and the Docusoap. Discuss how you would direct your own trailer for a Documentary about your school using storyboards.

Analyze the Traditional Documentary and the Docusoap. Discuss how you would direct your own trailer for a Documentary about your school using storyboards. Ingredients of Documentaries As with all programmes on the television documentaries and docusoaps have many ingredients. Many of these we don't realise as we are watching our television. The scheduling of the programme is one of these ingredients. Documentaries are scheduled at different times and at different times depending on their target audience. A docusoap, such as "Making the Band", which is aimed at teenagers will not be scheduled at two o'clock on a Wednesday afternoon because most teenagers are at school. It is actually screened at midday on Sunday; in amongst other programmes that are aimed at teenagers, these are collectively called T4, and are on channel 4. These programmes are shown at this time because on Sunday because on Sunday teenagers just want to lounge about and watch the 'telly' since there is nothing else for them to do. "Making the band" probably wouldn't get high viewing figures if it were screened on Saturday because most people aren't at home. A docusoap with a different target audience will be screened at a different time and probably on a different channel. "Airport" has a larger target audience. It is aimed at people who are in their mid-twenties or older. "Airport" is screened at eight o'clock in the evening, on a weekday, on BBC1. ...read more.

Docusoaps are generally more popular than traditional documentaries. That is why docusoaps are screened at prime time and traditional documentaries aren't. Traditional documentaries are usually screened on BBC2 and channel 4; these are the channels with lower viewing figures, whereas docusoaps are screened on BBC1 and ITV. Docusoaps are made as a real life alternative to soap operas. A docusoap cannot be planned before it is filmed because the makers of the docusoap do not know what is going to happen. A docusoap is made up of mainly live footage. On the other hand, traditional documentaries are planned before they are filmed. Most of the material is planned before filming, but sometimes there are factors which can't be planned. For example in "Close up North: Two Tribes" everything was planned except the result of the match. Docusoaps contain a lot of on-the-spot interviews, whereas in a traditional documentary most of the interviews are planned and rehearsed. Popularity of the Docusoap Docusoaps have become so popular for the same reasons that soap operas are very popular. Docusoaps present the public as characters and unlike those in a soap opera, these characters are real. The audience can relate to them. Not only do docusoaps give the characters life at work but also show a personal side, which the audience feel for. Also, like a soap opera, the 'episodes' follow on from each other. They have continuity. If something isn't concluded in one 'episode' it will follow on to the next one. ...read more.

The third shot shows the better side of Kenton School. I have chosen a shot featuring the main member of staff, Mrs Carr. She is controlling her class well and they are behaving excellently. I have shown this in the trailer, as I do not want to depict Kenton as a terrible school. If I put good thing in the programme but no in the trailer then people who don't watch the programme will get the wrong impression. The fourth shot is, again, of Anthony. He is standing with his friend smoking a cigarette at the side of the building and telling the camera that he doesn't do any work. This is an informal introduction to the main 'character', so the audience get an idea what he is like before the programme even airs. The fifth shot is simply of the school site. I have put this in to give the audience an idea of the place in which the documentary is set. It starts with a long shot of the sixth form block and then zooms out to show the full site. The sixth and final shot has a black background with the writing "DO YOU DO THAT AT HOME?" Followed by "BBC1" then "MONDAY 9.00pm". This tells the viewer what the programme is when it is on and on what channel. On the left hand side of the screen will be a freeze frame of Anthony holding a chair up in the air. This adds a visual, which the audience will remember. ?? ?? ?? ?? Donna Hodgson ...read more.