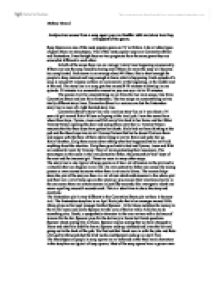 Analyze two scenes from a soap opera you are familiar with and show how they are typical of the genre.

Analyze two scenes from a soap opera you are familiar with and show how they are typical of the genre. Soap Operas are one of the most popular genre on TV in Britain. Like all other types of genre there are stereotypes. Two of the most popular soaps are Coronation Street and Eastenders. Even though they are two programs from the same genre they are somewhat different to each other. In both of the soaps there are on average 5 story lines happening concurrently. If there are less the soap would be boring and if there are more the soap will become too complicated. Each scene is on average about 40-50sec. this is short enough for people to keep interest and long enough to know what is happening. Each episode of a soap is around 25 minutes as there are commercial at the beginning, in the middle and at the end. The story line in a soap gets has around 8-10 minutes to develop in one episode. ...read more.

An over protective father can accuse the wrong person or even accuse someone when there is no-one to blame. The camera helps show the plot of the story as there is a lot of cuts which adds tension to the whole plot and there are a lot of close-ups on the actors so you can see their emotions clearly. in the one scene there are sixteen scenes in just fifty seconds. this averages to about one scene equalling around 4 seconds each. This is a short time to show the story and emotions. The Eastenders plot is very different to the Coronation Street plot as there is humour in it. The Eastenders storyline is an April fools joke that a bar manager named Alfie Moon plays on his inept younger brother Spencer. Alfie Moon switches the money in the till for euros and leaves Spencer to take care of the bar while Alfie has to do something else. ...read more.

Even though they are scenes from the same genre of, they are different in some ways. The seriousness of the scenes is different. Coronation Streets storyline is hard-hitting and very serious where as the Eastenders storyline is a fun plot for April Fools. They also show the different stereotypes in the genre and how the camera can work to add tension and show emotions. The storyline length is also different as the Coronation Street storyline will last around 3-4 months whereas the Easenders plot will last just only an episode. Even with these differences they are still typical of the soap opera genre. They both have stereotypes typical of the genre and use the camera to show the story in a quick way, which is needed in a soap. the length of the scenes is also typical of all soap operas as they are all 35-30 minutes long and have around four storylines in total happening at once. this makes 6-7 minutes for each storyline, With only a few minutes for each storyline, good camera work is needed. Mathew Howell ...read more.