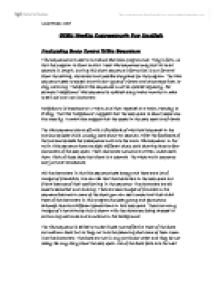 GCSE Media Coursework for English Analyzing Soap Opera Title Sequence Title sequences are used to introduce television programmes. They inform us that the program is about to start. Most title sequences only last 30 to 60 seconds in length. During this short sequence information is put forward about the setting, characters and possible storylines for the program. The title sequence needs to appeal to particular types of viewers and encourage them to stay watching. Therefore title sequences must be updated regularly. For example 'Neighbours' title sequence is updated every twelve months in order to edit old and new characters. Neighbours is broadcast at 1.45pm and then repeated at 5.35pm Monday to Friday. The title 'Neighbours' suggests that the soap opera is about people who live close by. It could also suggest that the people in the soap opera are friends. ...read more.

Most of the characters in this programme look young and glamorous although there are different generations in this soap opera. There are many images of a hot climate; this is shown with the characters being dressed in swimming costumes and sunshine in the background. The title sequence is edited to make it look more effective. Most of the shots are medium shots but as they cut into the following shot some of them zoom into the characters. The shots are not in any particular order and they do not really tell any story about the soap opera. All of the shots fade into the next shot; none of them cut or dissolve. The rhythm does not speed up or slow down, they are all even. I think the effect that this gives to the sequence is a calm and relaxed atmosphere, which I feel gives the audience the impression that there about to view an easy watching soap opera. ...read more.

The style of writing is italic and is written in white. The writing is underlined with a curved line. I think the type of audience that this soap opera is aimed at is mainly women usually over the age of 30. I don't think that anyone under the age of 30 would enjoy watching this soap opera. As the show is shown at 1.30pm I expect that unemployed people will be one type of audience to watch this show, although it is also repeated at 5.35pm most employed people work the hours of 9am to 6pm so the majority of employed people wouldn't be able to watch this programme. I think this title sequence is quite effective because it has a catchy tune to it, which everyone seems to remember even if they are not regular watchers of the soap. It also gets across all of the points it needs to get across to the audience in the short amount of time used. Louie Fitsiou 11DE ...read more.