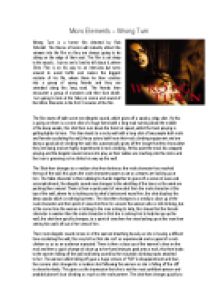 Anaysis of the first 3 minutes of the horror film &quot;Wrong Turn&quot;.

﻿Micro Elements ? Wrong Turn Wrong Turn is a horror film directed by Rob Schmidt. The theme of horror will instantly attract the viewers into the film as they are always going to be sitting on the edge of their seat. The film is set deep in the woods? but no one?s lived to tell about it, where Chris Finn is on his way to an interview but turns around to avoid traffic and makes the biggest mistake of his life, where there he then crashes into a group of young friends and they are stranded along this long road. The friends then encounter a group of monsters and then face death. I am going to look at the Misc en scene and sound of the Micro Elements in the first 3 minutes of the film. The film starts off with some non-diegetic sound, which gives off a spooky, edgy vibe. As this is going on there is a crane shot of a huge forest with a long road running down the middle of the deep woods, this shot then runs down the forest at speed, whilst the track playing is getting lighter to hear. This then leads to a rocky wall with a long shot of two people both male and female escalating the wall, these ...read more.

When the conversation ends there is then a feint drumbeat, this may intimidate the audience and get them think what?s going to happen. The camera is now a long shot looking down on the women still attempting to climb up the rocky wall, a bird then tweets in the background and you hear a bang and the male character gives a short groan, the women then calls his name. The camera shot then changes to a medium shot of the women from her left side of her still trying to get up this wall, it then jump-cuts to a distance shot of her back and the wall and what?s above her, this may show the audience that she really needs help and the audience are on her side in wanting the male to help pull her up the cliff. The camera then changes to a medium close up from above of the women and then a point of view of the women. These quick changes of shots are effective as they keep the audience excited and are waiting to see what happens next. As the camera is on the women?s point of view the male character at the top of the cliff then falls to the floor and blood runs down the cliff and drops onto her face, ...read more.

To conclude these first few minutes the audience would have felt on the edge of their seat and nearly paralyzed looking at the screen as they hear and see weird events that occur with the blood and the deep banging of the drum in the background track. This quick montage of camera shots in the first few minutes of the film add great effect to the horror theme as they scare the audience and leave them in such fear as what was going to happen next in the film. The sequence starts with a feeling of isolation as the dividers are away from civilization, ?the rushing in for the camera helps create a feeling of stress and this is added to be the POV shots? of the man looking down of the women. The audience are helped to quickly identify with the women?s position that is in danger, and it is interesting how this develops when we get his falling and then getting POV shots from her. The fast montage of edits- often close-ups gives specific details about the ropes slipping etc. but restrict us from knowing who is endangering and threatening her. The unknown monster is always the scariest one. ...read more.

This is a fairly detailed analysis of the micro-elements of the 1st 3 minutes of a film in the horror genre. It is occasionally quite insightful, but on the whole it should focus more upon explaining why the director is making these choices, rather than simply describing them.

It is also important to point out things like the age and conventional beauty of the couple who are climbing the rock face, and to notice that their clothes suggest they are reasonably well off, because this is in such stark contrast to the ugliness and poverty of the killers we will later meet. These aspects of the mise en scene are important, because they point to the subtextual MEANING of this seemingly meaningless film...

Current grade: 3 stars maximum, but probably less because there are some errors in the use of terms like "micro-elements" and the term "diegetic sound" is used more often than it needs to be.