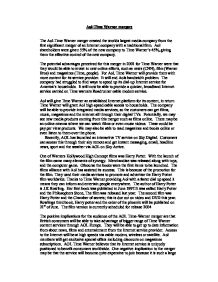 Aol-Time Warner mergers The Aol-Time Warner merger created the worlds largest media company from the first significant merger of an Internet company with a traditional firm. Aol shareholders were given 55% of the new company to Time Warner's 45%, giving them the effective control of the new company. The potential advantages perceived for this merger in 2001 for Time Warner were that they would be able to invest in new online efforts, such as news (CNN), film (Warner Bros) and magazines (Time, people). For Aol, Time Warner will provide them with more content for its service provider. It will end Aols bandwidth problem. The company had struggled to find ways to speed up its dial-up Internet service for America's households. It will now be able to provide a quicker, broadband Internet service carried on Time warners Roadrunner cable modem service. Aol will give Time Warner an established Internet platform for its content, in return Time Warner will grant Aol high-speed cable access to households. The company will be able to provide integrated media services, so the customers can get films, music, magazines and the internet all through their digital TVs. ...read more.

Her first book was published in June 1997.It was called Harry Potter and the Philosophers Stone, The film was released last year. The second film was Harry Potter and the Chamber of secrets; this is due out on video and DVD this year. Rowlings third book, Harry potter and the order of the phoenix will be published on 21st of June. The film version is currently scheduled for release 2004 The positive implications for the audience of the AOL Time-Warner merger are that British consumers will be able to take advantage of bigger range of Time Warner content services through AOL Europe. They will be able to get up to date information from about news, films and entertainment from the Internet service provider. Access to the Internet will be at high speeds via cable modem, wireless or satellite. Aol members will get exclusive special offers including discounts on magazines subscriptions. AOL Time Warner believes that its Internet service is uniquely positioned to benefit consumers worldwide. One negative implication to the merger may be that the service will become quite expensive to join because it is such a large well-known media organisation. ...read more.

Ted Turner, the billionaire founder of CNN news network was the latest in a growing line of top line executives to quit from his job as vice-chairman. The Internet service provider is a shadow of the business that acquired Time Warner two years ago. Turner launched CNN in 1980 and changed television news for the better. He went on to create cartoon network, and hundreds of MGM films, which he showed on another channel, Turner Classic Movies. His company then merged with Time Warner. Aol and Time Warner represented a link between new media (AOL as an internet provider) and the old media (Time Warner, a traditional media group from films to publishing.) It was important, at an organisational level because it represented the principle of convergence. Overall, after looking at all this information I think that the AOL Time Warner started out two years ago as a great success and it had a great future ahead of it. However, during the past two years I think the company has lacked leadership, therefore resulting in a decline of subscribers and a loss of money. It may still be the largest media company but it certainly is not as successful as you may think. ...read more.