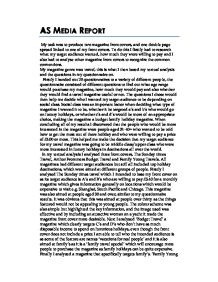 As Media Report. My task was to produce two magazine front covers, and one double page spread linked to one of my front covers. To do this I firstly had to research what my target audience wanted,

AS MEDIA REPORT My task was to produce two magazine front covers, and one double page spread linked to one of my front covers. To do this I firstly had to research what my target audience wanted, how much they were willing to pay and I also had to analyse other magazine front covers to recognize the common conventions. My magazine genre was travel; this is what I then based my textual analysis and the questions in my questionnaire on. Firstly I handed out 20 questionnaires to a variety of different people, the questionnaire consisted of different questions to find out what age range would purchase my magazine, how much they would pay and also whether they would find a travel magazine useful or not. The questions I chose would then help me decide who I wanted my target audience to be depending on social class. Social class was an important factor when deciding what type of magazine I wanted it to be, whether it be targeted a's and b's who would go on luxury holidays, or whether c's and d's would be more of an appropriate choice, making the magazine a budget family holiday magazine. ...read more.

some of the feature are names 'vacations for real people' and it is also aimed at family's as it is a 'family travel special' which will encourage more people to purchase the magazine as family holidays can be quite expensive. Finally I analysed a magazine that specifically targets family's. 'Family Young Travels' is priced at �2.25 per month which is reasonable for family's who have to spend there money on there children, but the magazine features exotic locations e.g. Mauritius and Port Louis both expensive locations which are made desirable in this magazine. The layout is simple but the bold text is effective and the image relates to the title of 'family young'. As a result of using both my questionnaire results and my textual analyse I came to the conclusion that my magazine's target audience is mainly A's and B's as luxurious destinations are clearly made more desirable on magazine front cover's, I also decided that I'm going to price y magazine at �4.10, a reasonable price for my chosen target market who want advice on the best holiday destinations. ...read more.

I priced both magazines at �4.10 as my questionnaire shown people were willing to pay more for a good quality magazine; I also linked both front covers to the time of year which was written underneath the price. My double page spread linked briefly to my front cover, however I based the double page spread on British city breaks. Birmingham being a cosmopolitan city would be a likely destination for my target audience of A's and B's to visit, In my article I mentioned all the things Birmingham has to offer making it a more desirable place for people to visit. The theme being 'winter breaks' my article, and the image all had to reflect on the cover line 'winter weekend breaks in Birmingham' the image was taken late afternoon so the Christmas lights were more visible, also Brindley Place in Birmingham was an excellent area to take the image as it isn't too busy, and it has lots of small bars, restaurants and shops. Compared with a double page spread in the free travel magazine 'Beyond', mine is very similar as I used an image which covered the majority of the page and wrote the article on the right hand side of the page. ...read more.