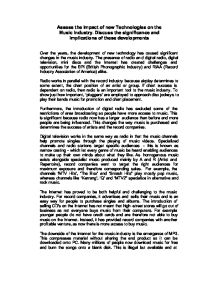 Assess the impact of new technologies on the music industry - Discuss the significance and implications of these developments.

Assess the Impact of new Technologies on the Music Industry. Discuss the significance and Implications of these developments Over the years, the development of new technology has caused significant changes in the music industry. The presence of radio and digital radio, digital television, mini discs and the Internet has created challenges and opportunities for the BPI (British Phonographic Industry) and RIAA (Record Industry Association of America) alike. Radio works in parallel with the record industry because airplay determines to some extent, the chart position of an artist or group. If chart success is dependent on radio, then radio is an important tool to the music industry. To show just how important, 'pluggers' are employed to approach disc jockeys to play their bands music for promotion and chart placement. Furthermore, the introduction of digital radio has excluded some of the restrictions of area broadcasting so people have more access to music. This is significant because radio now has a larger audience than before and more people are being influenced. ...read more.

The introduction of selling CD's on the Internet has not meant that high-street stores will go out of business as not everyone buys music from their computers. For example younger people do not have credit cards and are therefore not able to buy music on the Internet. Instead, it has provided record companies with another profitable venture, as now there is more access to buy music. The downside of the Internet for the music industry is the emergence of MP3. This compresses material without altering the end product so it can be downloaded onto PC. Many millions of people now download music for free and burn the songs onto a blank disk. This is illegal but available and at present because of the mass numbers of people doing it, the BPI and RIAA cannot stop it from happening There are many arguments in favour of downloading, but the music industry insists outright that it should be banned. ...read more.

However, it can be argued that through buying albums choice is already limited. File sharing actually allows audiences more freedom to obtain the music that they want to hear, rather than paying for an album and only liking two out of ten songs. Alongside the threat of Internet downloading is the existence of mini disks and mini disk players. This causes a problem for the record industry as people can hold an extensive collection of music from a variety of different genres on one small disk for the price of a blank mini disk rather that a compilation compact disk for about fifteen pounds. The new technologies discussed above have a mixture of positive and negative outcomes for the record industry. They benefit from some - for example radio and digital television, even the Internet, but suffer from other developments such as file sharing. In order to compete with the ever-growing demand for music that is cheap and readily available, then it is advised that the industry make a number of significant changes that will benefit themselves and the consumer. Natalie Meyer ...read more.