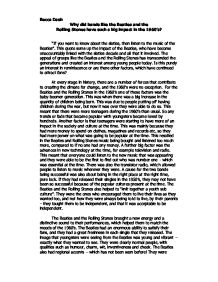 At every stage in history, there are a number of forces that contribute to creating the climate for change, and the 1960's were no exception. For the Beatles and the Rolling Stones in the 1960's one of these factors was the baby-boomer generation

"If you want to know about the sixties, then listen to the music of the Beatles". This quote sums up the impact of the Beatles, who have become unaccountably linked with the sixties decade and all that it involved. The appeal of groups like the Beatles and the Rolling Stones has transcended the generations and created an interest among young people today. Is this purely an interest in reminiscence or are there other factors, which have continued to attract fans? At every stage in history, there are a number of forces that contribute to creating the climate for change, and the 1960's were no exception. For the Beatles and the Rolling Stones in the 1960's one of these factors was the baby-boomer generation. This was when there was a big increase in the quantity of children being born. This was due to people putting off having children during the war, but now it was over they were able to do so. This meant that there were more teenagers during the 1960's than usual. So any trends or fads that became popular with youngsters became loved by hundreds. Another factor is that teenagers were starting to have more of an impact in the society and culture at the time. This was mainly because they had more money to spend on clothes, magazines and records etc, so they had more power on what was going to be popular at the time. This resulted in the Beatles and Rolling Stones music being bought and listened too much more, compared to if no one had any money. ...read more.

Brian also set rules for the band that would make more people think they were appropriate, such as don't smoke in public and always keep your girls in the background. He furthermore had a part to play in who was actually in the band, he was the one who chose the final band, with the last member being Pete Best - Ringo Starr, even though he had no personality Brian thought he fit the band well, and he was correct. In addition to doing all the background work for the band, he produced money for them in times of need; this made the band successful as it meant they were able to do what needed to be done to become big, due to their amazing manager. Brian basically decided where they went, who they saw, whom they spoke too and created advertising deals for them! Without this great input into their career, they would be nowhere. Another major person in the success of the Beatles is George Martin, their record producer, without him their music wouldn't have sounded like it does. He was the one who sat for hours and listened to the raw music which the band produced and mixed it and made it fit, resulting in it sounding amazing. George also ensured that new sounds were brought into their music regularly, he's the one responsible for keeping them fresh throughout their careers. He furthermore holds a vast amount of the responsibility for the band being so successful, as he's the one that actually decided which songs would be released, and which songs would be binned. ...read more.

They played for no more than half an hour at each concert, however this hard work guaranteed them star status. A British band conquering America was also a sign of international cultural exchange, and it marked the first of many exchanges between the two countries. The Beatles also made a stand for what the believed in, as they refused to play in segregated audiences, this influenced the people as they saw that it was ok to stand up for what you believed in, and it encouraged different races to mix and become one. The Rolling Stones also made a stand, as they decided to provide music for both their black and their white audiences. In conclusion, both the Beatles and the Rolling Stones had an enormous impact of the people in the 1960's. They encouraged people to relax and live life as they wanted to. Many things influenced their continuing success, including their normality, their style, their music and their behaviour throughout their careers. The Beatles success can be seen clearly through Beatle Mania, wherever they went Beatle Mania followed. They couldn't help this; it was a form of real love for them. George said many years later: "The world used us as an excuse to go mad, and then blamed it on us", but there is a parallel theory that it was time for the world to go that sort of mad - get down a bit, loosen up and have some fun. This amazing change in the people of the world was hugely down to the distinctiveness, uniqueness and influential music that the Beatles and the Rolling Stones wrote and released. Becca Dash Why did bands like the Beatles and the Rolling Stones have such a big impact in the 1960's? ...read more.