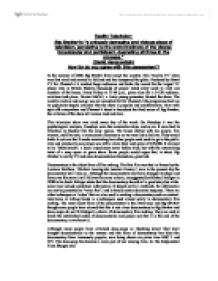 Big Brotheris &quot;a uniquely damaging and vicious piece of television, pandering to the worst instincts of the viewer, broadcaster and participant, degrading all three in the process.&quot; (David Aaronovitch) - How far do you agree with this assessment?

Reality Television: Big Brother is "a uniquely damaging and vicious piece of television, pandering to the worst instincts of the viewer, broadcaster and participant, degrading all three in the process." (David Aaronovitch) How far do you agree with this assessment? In the summer of 2000 Big Brother fever swept the country. This 'Reality TV' show was first aired and created in Holland and has conquered the globe. Produced by Bazal TV for Channel 4 it reached huge audiences and broke the record for the largest TV phone vote in British History; thousands of people voted every week to evict one member of the house. Every Friday at 11:00 p.m., prime time for a 16-28 audience, evictions took place. Davina McCall, a lively young presenter, fronted the show. The weekly eviction and run up was an immediate hit for Channel 4 the programme built on its popularity despite criticism that the show is populist and uninformative. Now with spin-offs everywhere and Channel 4 about to broadcast the third series of Big Brother, the criticism of the show still comes loud and clear. This television show was aired every day of the week: On Mondays it was the psychological analysis, Tuesdays were the nomination days, and so on. It even had its Omnibus on Sunday like the soap operas. The house started with ten people, five women, and five men, a microcosm of society or so we were led to believe. ...read more.

(The Independent, 17/07/2000) These people and their lives are ones that the 'average' viewer relates to and wants to watch. This is as opposed to the traditional documentary watched by the high brow intellectual viewer wanting something that will challenge them. This is also the case in Big Brother where the contestants are 'Joe Public' as they represent the banal every day people on the street. This has been a major criticism of Big Brother and docu-soaps. People say that Big Brother, the child of the docu-soap, contributed to the dumbing down of British TV according to the white, educated, middle-class, southerner or so the BBC would have you believe. Some people have criticised Docusoaps and reality TV as only providing entertainment when the purpose of a documentary is to inform as well as entertain. They claim that Reality TV does not do this, and does not fit Rabiger's Criteria. They say that Reality TV programmes like Big Brother do not develop the audience's knowledge of a person or of a situation. They claim that these programmes contain little more than devised set-ups and created truths. They do not tell a good story, do not introduce engaging or interesting characters, and do not say much about the human condition. The participants are merely show-offs who are media-savvy and perform to the camera, meaning that Reality TV does not contain real-life situations. ...read more.

Watching the development and changes in the characters was crucial to the show and included moments of climax, such as Vanessa's breakdown and Nasty Nick's expulsion from the house. These moments took the nation by storm and the show became more than just a sociological and psychological investigation of the inhabitants of the household, but at times was an investigation into our own nation's psychological and sociological state. This also shows the social values of our society, where certain characters became idolised or detested by the viewers. Big Brother does have a place in our society. As the housemates chanted, it may be portrayed as 'only a game-show', but it is a much more intricate piece of documentary film-making than this would imply. It reveals the true psyche of the viewer, broadcaster, and the participant. It is not degrading for the viewer to enjoy this piece of television. It is not degrading for the producers. Maybe it is degrading for some of the participants, but they were all willing participants and often 'quality' documentaries will degrade the participants in the process of enlightening the viewer. When flagging up controversial issues or investigations then quite often the traditional documentary-maker will have inevitably shown some of the participants in a bad light. It is not 'damaging' as Aaronovitch suggests but is informative, and led to moral and social issues being discussed in the public arena. This can only be good. Lloyd Russell-Moyle English Course Work Media Assessment Priory School, Lewes Mr Ashworth 10 JAH B4JA ...read more.