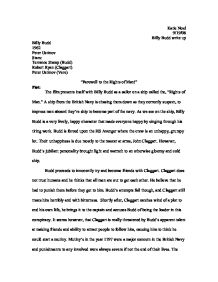 Billy Budd's lessons in Farewell to the Rights of Man!

Katie Noel 9/19/08 Billy Budd write up Billy Budd 1962 Peter Ustinov Stars: Terrance Stamp (Budd) Robert Ryan (Claggart) Peter Ustinov (Vere) "Farewell to the Rights of Man!" Plot: The film presents itself with Billy Budd as a sailor on a ship called the, "Rights of Man." A ship from the British Navy is chasing them down as they correctly suspect, to impress men aboard they're ship to become part of the navy. As we see on the ship, Billy Budd is a very lively, happy character that made everyone happy by singing through his tiring work. Budd is forced upon the HS Avenger where the crew is an unhappy, grumpy lot. Their unhappiness is due mostly to the master at arms, John Claggart. However, Budd's jubilant personality brought light and warmth to an otherwise gloomy and cold ship. Budd proceeds to innocently try and become friends with Claggart. Claggart does not trust humans and he thinks that all men are out to get each other. He believe that he had to punish them before they get to him. Budd's attempts fail though, and Claggart still treats him horribly and with bitterness. Shortly after, Claggart catches wind of a plot to end his own life, he brings it to the captain and accuses Budd of being the leader in this conspiracy. ...read more.

The captain also takes into account the life lost; that although Claggart was a gloomy person, he had the right to live and that right was taken away when Billy killed him. Side B would argue that Billy did it by accident and that it was not a malicious kill. Chances are, Billy would not kill again. There is also the chance that people will mutiny if Billy dies. These are the thoughts that run through the Captain's mind when he ponders Billy's future. The conflict ends with Bill's execution through hanging. The Captain deduces that the right choice to make is to kill Billy according to the law, and Billy accepts that. Despite the crew's disapproval of the action, the captain has to go through with it. Billy also is very content with the Captains decision, because he understands what he killed a man and that that is a capital punishment. Billy does not hold any bad feelings for feel bitter, because he feels bad about Claggart's death as well. The Message and the Subtext: (I was not clear whether you were referring to the time the book was made, or the time the movie was made) The book was started in 1886 by Herman Melville. ...read more.

During the time Billy was aboard this Miserable ship Avenger, he always kept a positive attitude and took the "cup half full," approach to any situation. That teaches me that maybe school isn't that bad and maybe I should take things from a different angle instead of seeing all the work involved. I also learned to accept what's for me and what you can't help. Such as this paper, at first I was very reluctant to start a 13-paragraph essay. That's pretty daunting, but as I rounded my 5th paragraph I knew that I had to do this. This is acceptance, not to the same greatness and peacefulness ad Billy's, but still getting there. The third lesson I took from Billy Budd is not to kill someone., because there are always consequences for your actions. Not that I ever considered killing someone, but I mean that it made a big impression on me that in the real world, hey don't care is you have a problem getting the words out so you just punch. There are no second chances. So, with me on the road I realize that there is no saying "whoops sorry, won't happen again." There's saying, "Please don't tell my parents I got arrested." It's kind of a slap in the face that bad things happen to good people, and good people do bad things to make that true. ...read more.