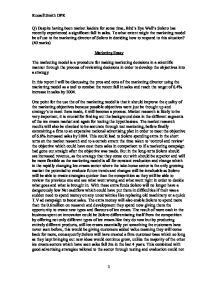 Bird's Eye Wall's Solero has recently experienced a significant fall in sales - To what extent might the marketing model be of use to the marketing director of Solero in deciding how to respond to this situation?

Q) Despite having been market leaders for some time, Bird's Eye Wall's Solero has recently experienced a significant fall in sales. To what extent might the marketing model be of use to the marketing director of Solero in deciding how to respond to this situation? (40 marks) Marketing Essay The marketing model is a procedure for making marketing decisions in a scientific manner through the process of reviewing decisions in order to develop the objectives into a strategy. In this report I will be discussing the pros and cons of the marketing director using the marketing model as a tool to combat the recent fall in sales and reach the target of 6.4% increase in sales by 2004. One point for the use the of the marketing model is that it should improve the quality of the marketing objectives because possible objectives wont just be thought up and strategy's to meet them made, it will become a process. Market research is likely to be very important, it is crucial for finding out the background data in the different segments of the ice cream market and again for testing the hypothesises. The market research results will also be checked to be accurate through test marketing, before finally committing a firm to an expensive national advertising plan in order to meet the objective of 6.8% increased sales by 2004. This could lead to Solero spending extra in the short term on the market research and to a certain extent the time taken to 'control and ...read more.

through continuous improvement reduce the wastage and increase profits and therefore increase the possibility of introducing modern machinery to raise production levels while lowering costs as the need for labour is lowered. The best way I feel though to increase standards quickly without spending lots on modern equipment is to improve the ability levels of those at work, a skilled and well-trained workforce is likely to produce more and make fewer mistakes. Employees should be able to complete the task more quickly and not need as much supervision or advice. They should be able to solve their own work-related problems and may be in a better position to contribute ideas on how to increase productivity further. On top of this there could be savings as the need for supervisors could be gone leaving the employees their own bosses, and the company hundreds of thousands better off each year while improving employee motivation. One point against the marketing model being brought in to combat the recent fall in sales is that there are so many uncertainties in the business world that it wont make a large enough impact to warrant the high costs. This could lead to Solero's marketing department using all the right people with hordes of experience to gather all the right data and do the rest of the process perfectly but when they come to put the campaign into action something would have changed, whether this be a competitor bringing out a similar campaign or the economic climate changing rapidly it would throw the whole operation out of sink. ...read more.

The result of this could be Solero backing out of the possible campaign because it is very high risk and that's not really what they're looking for when they're short on money and this could be the last big move they make, for which they would want something with a lot less risk involved. But the hesitation would have cost Solero a lot of money in research and the drawing up of possible campaigns by experts for which they would have been charged. This may put Solero in a worse position next time they think about something like this again as they will have less funds available and may have lost some contacts because of the work put in that amounted to nothing. This all depends on how good Solero's new marketing strategy is and if it is able to compete with competition that can spend 2 times as much money on advertising, this is not impossible though, if Solero were able to make customers feel this is the ice cream made for the them and its worth the money unlike the competition, money spent on expensive advertising could be avoided. For instance if Solero could not use TV as a major part of the campaign it would free up a lot of money which would go a lot further in many other fields. Through this advertising Solero will need to give the impression to the customer of Added value in the product this could be done by giving away toys or free entry into a raffle or something that differentiates Solero from the competition in the market. ...read more.