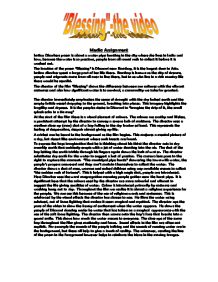 Media Assignment Imtiaz Dharkers poem is about a water pipe bursting in the city where she lives in India and how, because the water is so precious, people from all round rush to collect it before it is washed out. The location of the poem "Blessing" is Dharavi near Bombay, it is the largest slum in Asia. Imtiaz dharker spent a large part of her life there. Bombay is known as the city of dreams, people and migrants come from all over to live there, but to us who live in a rich country life there would be squalid. The director of the film "Blessing" shows the difference between our cultures with the vibrant costumes and also how significant water is to survival, a commodity we take for granted. ...read more.

To express the boys imagination that he is thinking about his thirst the director cuts to dry crumbly earth that suddenly erupts with a jet of water shooting into the air. The shot of the boy letting the earth trickle through his fingers again shows the lack of water. The director substitutes dry earth for the water to suggest a lust of passion. The camera lens pans to the right to capture the moment. "The municipal pipe bursts" showering the town with water, the people's prayers answered and they can't contain themselves to collect the water. The director shows a shot of men, woman and naked children using any available means to collect "the sudden rush of fortune". This is helped with a high angle shot, people are introduced. ...read more.

The director then zooms onto the boy's face that breaks into a grand smile. This shows how much the water means to everyone. The close ups of the same boy throughout the film gives continuity and focus. Sound effects in the film are often not explicit. For example the sounds of the people talking and the sounds of running water are in the background, but these all help to give a touch of reality. The voiceover, reading the line of the poem in the foreground however helps to reinforce the ideas in the moving images. In conclusion the director has been successful in creating a short film that seems to have an educational value. This is called Edu-tainment meaning it is educational yet entertaining. By clever use of editing, camera angles, visual and sound techniques the director teaches us how water is a vital part of life. By Matthew Wilson ...read more.