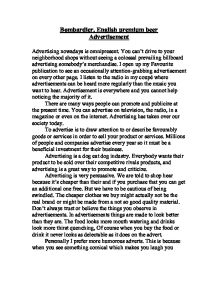 Bombardier, English premium beer Advertisement Advertising nowadays is omnipresent. You can't drive to your neighborhood shops without seeing a colossal prevailing billboard advertising somebody's merchandise. I open up my Favourite publication to see an occasionally attention-grabbing advertisement on every other page. I listen to the radio in my coup� where advertisements can be heard more regularly than the music you want to hear. Advertisement is everywhere and you cannot help noticing the majority of it. There are many ways people can promote and publicize at the present time. You can advertise on television, the radio, in a magazine or even on the internet. Advertising has taken over our society today. To advertise is to draw attention to or describe favourably goods or services in order to sell your product or services. Millions of people and companies advertise every year so it must be a beneficial investment for their business. Advertising is a dog eat dog industry. Everybody wants their product to be sold over their competitive rivals products, and advertising is a great way to promote and criticize. ...read more.

The advertisement that I am going to explore throughout this essay is advertising a premium bitter called Bombardier. The advert is very simplistic but sophisticated at the same time. A beautiful looking pint of bitter is the focal point of the advertisement. This pint is almost looks almost 3d and is beautifully clear. It almost makes you want to seize the bitter from on the page and drink it there and then. The pint has a festive piece of holly resting on top of the thirst quenching froth. The advert has the words "God rest ye merry Englishmen" in the bottom right hand corner. The Pint glass has Bombardier and English Premium Bitter wrote on it. The pint is resting on a pure white background which helps it become the prominent figure on the advert. I would say this advertisement is aimed at a middle aged man as bitter is usually a mans drink. The fact that the bitter is English also attracts the males, as many middle aged males are very patriotic. ...read more.

Contrasting colours are used to make the writing on the advertisement stand out. On the beer glass, the bright white writing is placed upon dark blue and red backgrounds. This helps the writing to stand out and be very noticeable. The White background of the advertisement helps to nourish the beautiful enticing colour of the clear appealing bitter stand out immensely. It makes it look like you can almost reach out and grab the beer from on the page. The advertisement will attract many people as it is very festive and it was released just before Christmas, when everyone is in the festive spirit. It will also entice a very patriotic English male audience. But the advertisement will not be received well by foreign people as the advertisement is too biased towards Englishmen. The advertisement will also not attract people from different religions as not everybody celebrates Christmas. Overall it is a simple but effective advertisement. The world of advertising will dominate for years to come especially on the internet where more people are starting to shop. Many different ways of advertising are now beginning to develop and so the industry will go from strength to strength. ...read more.