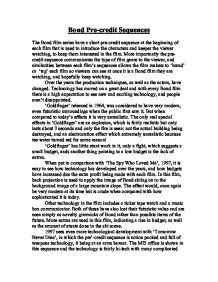 Bond Pre-credit Sequences The Bond film series have a short pre-credit sequence at the beginning of each film that is used to introduce the characters and keeper the viewer watching, to keep them interested in the film. More importantly the pre-credit sequence communicates the type of film genre to the viewer, and similarities between each film's sequences allows the film makers to 'brand' or 'tag' each film so viewers can see at once it is a Bond film they are watching, and hopefully keep watching. Over the years the production techniques, as well as the actors, have changed. Technology has moved on a great deal and with every Bond film there is a high expectation to see new and exciting technology, and people aren't disappointed. 'Goldfinger' released in 1964, was considered to have very modern, even futuristic surroundings when the public first saw it. But when compared to today's effects it is very unrealistic. The only real special effects in 'Goldfinger' are an explosion, which is fairly realistic but only lasts about 3 seconds and only the fire is seen: not the actual building being destroyed, and an electrocution effect which extremely unrealistic because tee water turned red for some reason! ...read more.

Bond is very witty and likes to play around with words to use them to create the best comical effect. For example when talking about drugs he refers to them as 'heroin flavored bananas' which was appropriate to the context as the owner of the heroin plant, the Mexican government had claimed to have financing revolution with profit from selling bananas; not the drugs. Bonds character remains witty throughout all the films, and remains active at all times also; especially in bed it seems! Although Bond does not spend any time with women in 'Tomorrow Never Dies' it is easy to his attitude towards them from the other two films. He treats them as though they are merely objects, 'instruments of pleasure' as such made purely for his enjoyment. In 'Goldfinger', when he sees an assassin in the girl's eye he swings her around so she takes the blow to the head. To be fair, she was in league with the assassin but bond may have dealt with the situation differently; just pushing her to one side rather than forcing her to take the blow. Another example of his disrespect for women was simply getting up and leaving a girl with no explanation to his leaving with total dismissal of her feelings, proving he did not are for her, despite their intimate relations at point in time. ...read more.

with a man pleading him to stay when she is first introduced- showing a weakness (for affection and caring is often seen as a weakness and always portrayed as one in Bond films). What's interesting about the women in 'The Spy Who Loved Me' is, despite one has been 'promoted' to having a real role, the other is almost exactly the same as the one from 'Goldfinger', even betraying Bond in the same way to his planned death. M from 'Tomorrow Never Dies' is completely different from all the other Bond women. She is older, and is not his lover but his boss. She is the head of MI5, much like the Stella Rimmington, and wears a white suit to make her stand out. Her role in the sequence is one of a leader and although over ruled at one point by a man, is proved to make the best decisions as his was wrong. Therefore M's a character that's a lot closer to home to how women are treated today and is shown as a sort of hero character for women. So from technology to women, the bond films have seen many changes over the past decades. What will come in the future? I can't even guess. ...read more.