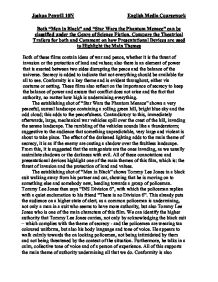 Both &quot;Men in Black&quot; and &quot;Star Wars the Phantom Menace&quot; can be classified under the Genre of Science Fiction. Compare the Theatrical Trailers for both and Comment on how Presentational Devices are used to Highlight the Main Themes

Both "Men in Black" and "Star Wars the Phantom Menace" can be classified under the Genre of Science Fiction. Compare the Theatrical Trailers for both and Comment on how Presentational Devices are used to Highlight the Main Themes Both of these films contain ideas of war and peace, whether it is the threat of invasion or the protection of land and values; also there is an element of power that is exerted between two sides disrupting the peace and the balance of the universe. Secrecy is added to indicate that not everything should be available for all to see. Conformity is a key theme and is evident throughout, either via costume or setting. These films also reflect on the importance of secrecy to keep the balance of power and ensure that conflict does not arise and the fact that authority, no matter how high is undermining everything. The establishing shot of "Star Wars the Phantom Menace" shows a very peaceful, surreal landscape containing a rolling green hill, bright blue sky and the odd cloud; this adds to the peacefulness. ...read more.

He appears to walk calmly towards the on looking policemen, not being intimidated by them and not being threatened by the context of the situation. Furthermore, he talks in a calm, collective tone of voice and of a person of experience. All of this supports the main theme of authority undermining all that we do. Conformity is also present as a main theme within this scene, due to the fact that the two groups of characters are wearing uniforms. Conformity is a main theme, both within Lucas's film and Sonnenfeld's. In "Men in Black" Tommy Lee Jones is always wearing the same black suit; this shows that he is committed to his job and that he has no life or existence outside of the agency. There is also a scene with Will Smith in the top of a stairwell. He is wearing a casual outfit consisting of a white sports jersey and trousers; he is holding a police badge and a pistol. As the trailer progresses we see Will Smith gradually conforming with the rules of this highly funded, unofficial government organisation. ...read more.

The costume they are wearing resembles our view of Jesus Christ, they wear earth coloured, flowing robes and they also have long, unkempt hair. Because these two main characters resemble Jesus, it shows us that they are on the side of good, and not necessarily associated with war, more to do with the protection aspect, coinciding with the main theme of protection of land and values. On the other hand, Darth Maul is wearing a black flowing robe with red and black make up. This shows that he has as much power, if not more that the Jedi's but also that he definitely on the side of evil. Another presentational device that is used to show us who is good and who is evil is the tone of their voice. For example, Both Ewan McGregor and Liam neeson speak with a serious yet re-assuring and calm voice, whilst Darth Maul speaks with a threatening, forceful tone of voice. Although both of these tones are serious and sometimes commanding, we feel more intimidated by Darth Maul's voice rather than Obi Wan's and Qui Gon's because of the clothes that they are wearing and their contrast between the two tones of voice. ...read more.