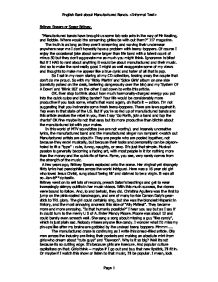 Britney Spears or Spear Britney. "Manufactured bands have brought us some fab solo acts in the way of Mr Keating, and Robbie. Where would the screaming girlies be with out them?'' J17 magazine. The truth is as long as they aren't screaming and waving their underwear anywhere near me I don't honestly have a problem with teeny-boppers. Of course I enjoy the occasional joke about some larger than life band with a talent count of minus 50 but they don't aggravate me as much you might think. Ignorance is bliss! But if I HAD to rant about anything it would be about manufactured and their music. And so to make the rant really good I might as well exaggerate some of my views and thoughts to make me appear like a true cynic and hater of all that is pop. So I sat in my room staring at my CD collection, tossing away the couple that don't do me proud. So with my 'Ricky Martin' and 'Spice Girls' album on one side (carefully poised on the desk, teetering dangerously over the bin) and my 'System Of A Down' and 'Blink 182' on the other I sat down to write this article. ...read more.

Or maybe if I watch this show or listen to that music, I'll be popular. I mean, look around you now (that's right just blatantly stare at them!), every one of these girls is incredibly insecure. You can't even speak your mind anymore without stomping on somebody's feelings. You make a 'Five' break up joke and the teeny-boppers have a fit. You make a Two Pac (deceased) joke and the Hip-Hop posse kindly raise their middle finger. And any comments of Marilyn Mansons femininity will have Satanists swarming around threatenin to send the forces of evil to your abode. In the States, songs about coming on over and getting hit in the face are all the rage. In Britain, the flavour is love. If you're ever making a boyband, be sure they sing songs about "love" and "s*x". If you're planning on making a girl group, make sure they sing songs about "love" and "s*x". Really its not that hard. The dudes on 'Popstars' make it look so hard. However, if you plan on plucking an underage girl from school (and there are laws against it) in the hopes that you'll create the next Britney, make sure she sings songs about "genies in bottles" and being unvirginised. ...read more.

Westlife, or using their pronunciation, "Westloife". Flying without Wings Everybody's looking for a something One thing that makes it all complete You'll find it in the strangest places Places you never knew it could be Some find it in the face of their children Some find it in their lovers eyes Who can deny the joy it brings When you've found that special thing You're flying without wings This is Westlife's entry into the "we condone drug usage" halls of chart history. I know that I'm only flying without wings after ten too many beers (so that's 10 beers in total yea). It's obvious that these depraved young men are either promoting illegal substances (S club Seven wannabe's) or singing about love. Whichever way you look at it, the song is pretty d**n kooky. All right, it's sweet and touching. This sucks. And to conclude....o wait someone's at the door. ::Abruptly stands knocking Ricky and Spice-eys into the bin. Looks out window:: And now I've been called away by a knock at my door. And the person knocking is a God-lover telling me I need the light of God. I've been thinking...God is a lot like a boyband. People go on about him 24/7 and plaster his posters on their bedrooms, but has he ever written his own tracks? Exactly. * descend soapbox * English Rant about Manufactured Bands. <Informal Text> Page 1 ...read more.