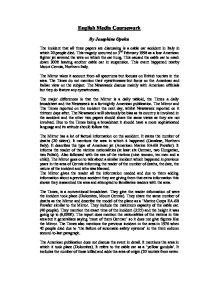 English Media Coursework By Josephine Opoku The incident that all three papers are discussing is a cable car accident in Italy in which 20 people died. This tragedy occurred on 3rd February 1998 as a low American fighter jet severed the wire on which the car hung. This caused the cable car to crash down 300ft leaving another cable car in suspension. This event happened nearby Mount Cermis, Northern Italy. The Mirror takes it account from all spectrums but focuses on British tourists in the area. The Times do not mention their eyewitnesses but focus on the American and Italian view on the subject. The Newsweek discuss mainly with American officials but they do feature any eyewitnesses. The major differences is that the Mirror is a daily tabloid, the Times a daily broadsheet and the Newsweek is a fortnightly American publication. The Mirror and The Times reported on the incident the next day, whilst Newsweek reported on it thirteen days after. The Newsweek will obviously be bias as its country is involved in the accident and the other two papers should share the same views as they are not involved. Due to the Times being a broadsheet it should have a more sophisticated language and its attitude should follow this. The Mirror has a lot of factual information on the accident. It states the number of deaths (20 skiers). ...read more.

The Mirror included these British tourists to give the report a personal aspect, this may gain interest from readers who would be attracted to the article as it brings the incident to the British shores that there own were involved. They also discussed the incident with a police chief Andrea Russo who described the scene saying 'all four wall of the car opened up like a cardboard box ' and tells of the severed bodies and the bloodstained snow. This shows what the scene looked like after the incident. They talked to a fire services spokesman to confirm the number of deaths and the US Defence Secretary William Cohen who gives the official American statement and view on the disaster. They also get an official statement from the Italian Regional President Carlo Andreotti who condemns the Americans. He was interviewed to give an impression of the Italians view on the accident. Cristina Antoniazzi a hotel owner nearby, she discusses what she heard at the time of the accident. This gives a view of a normal resident in the area and their view on the deaths, free from all the spin and censorship a government statement may have. The Times does not offer any statements from British officials or those on the scene. They do not care for their opinion as they are not involved and do not need their view on the matter. ...read more.

Also the picture of the plane is helps the reader envision the power it holds and with the force it may of hit the wire. The Times also gives more information on the area including a past accident and some history about the area. The Mirror uses its sensationalism to exaggerate the event by highlighting the word 'under' in bold this is used to blame the Americans for deliberately flying low and by using the word 'innocent' to describe the tourists who took the consequences for the careless Americans. The Times is also bias but it is not as blatant as in The Mirror, it says the plane had been flying 'very, very low' and that it was attempting to pull itself up when it hit the cable. This shows that thy are slightly bias as they seem to be defending the Americans in a very subtle way. An eyewitness also says and it also mentions that a US pilot said it had a 'bad jolt'. The Newsweek has a cynical view on the event and there involvement. This is two weeks after the event which shows that they do not care about the accident they attempt to put the blame on the Italians as they did not defend the Dolomites the week of the accident. They also try to say that both the U.S and the Italians have been 'hot-d*****g' through the cables. Due to it being an American paper they were more concerned with the safety of the pilots then those dead or injured. ...read more.