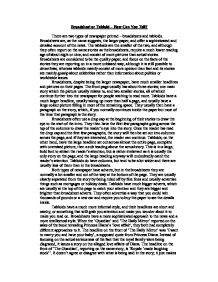 Broadsheet or Tabloid - How Can You Tell?

Broadsheet or Tabloid - How Can You Tell? There are two types of newspaper printed - broadsheets and tabloids. Broadsheets are, as the name suggests, the larger paper, and offer a sophisticated and detailed account of the news. The tabloids are the smaller of the two, and although they often report on the same stories as the broadsheets, require a much lower reading age of about eight or nine, and consist of more pictures than actual stories. Broadsheets are considered to be the quality paper, and focus on the facts of the stories they are reporting on in a more unbiased way, although it is still possible to detect bias, whereas tabloids mainly consist of more opinion than fact and its stories are mainly gossip about celebrities rather than information about politics or worldwide issues. Broadsheets, despite being the larger newspaper, have much smaller headlines and pictures on their pages. The front page usually has about three stories; one main story which the picture usually relates to, and two smaller stories, all of which continue further into the newspaper for people wishing to read more. ...read more.

The headline on the front of 'The Guardian', reporting on the same story, is 'Royals 'made laughing stock''. It doesn't agree or disagree with what is being said in the story; it just makes a brief statement using an opinion from a privy councillor, encouraging the reader to continue on to the story to find out more details if the headline appeals to them. Broadsheets have a much more formal approach to the news than tabloids do. 'The Guardian' refers to Princess Diana as the Princess of Wales, whereas 'The Daily Mirror' is less formal and calls her such names as 'Di' or Diana, suggesting that they are on first name or nickname terms, when they clearly aren't. Broadsheets use a much wider range of vocabulary than tabloids, and are usually require a reading age of twelve or above. Tabloids, due to their informal style, require a lower reading age of about eight years old. They also use noun phrases a lot in articles, such as 'kiss-and-tell cavalryman' in 'The Daily Mail', or 'disgraced ex-cavalry officer' in 'The Sun'. Tabloids tend to use metaphors a lot as well, for example 'Hewitt's claims about Princess Diana are about as credible as a schoolboy's boasts behind the bike shed' in 'The Daily Star'. ...read more.

The first paragraph says 'according to the book, Princess in Love, James Hewitt met Princess Diana at a Mayfair party in 1986. The story goes:' After this first paragraph, the entire article is just an account of what is in the book, so is more like it is telling a story than reviewing the book and the situation for Princess Diana. The 'Daily Star' has no facts in it at all, and proves this by separating it's article into sections, each of them titled 'they say', 'you say' and 'Daily Star says'. The 'Daily Star' doesn't give any details about the content of the book, and focuses on getting the opinions of respectable people like 'Tory MP Michael Fabricant', 'Di's lawyer, Lord Mishcon' and 'Buckingham Palace' to put down the book and make the reader agree that it should not be allowed. The picture on the front of 'Daily Star' is meant to look like a book, and it has a picture of Major James Hewitt and is titled 'A load of old b*!!*<#s' 'By Major James Spewitt'. Despite the 'censoring' on the title of the book, it is plain to see what it says, and is typical of a tabloid. Emma Chrystal ...read more.