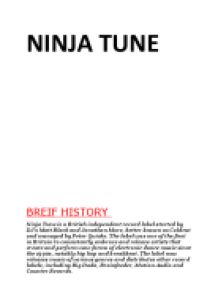 ﻿NINJA TUNE BREIF HISTORY Ninja Tune is a British independent record label started by DJ?s Matt Black and Jonathan More, better known as Coldcut and managed by Peter Quicke. The label was one of the first in Britain to consistently embrace and release artists that create and perform new forms of electronic dance music since the 1990s, notably hip hop and breakbeat. The label now releases music of various genres and distributes other record labels, including Big Dada, Brainfeeder, Motion Audio and Counter Records. Development In order to try and expand the label and make it more attractive for bigger named artists the label decided to setup another label that focus on Hip hop, dub, grime, electronic dance music. ...read more.

and people like the artist and look at the website and want to buy more songs so the label will make money. Also on social working sites like facebook there are music ads that get posted on people?s wall and you can view the songs on YouTube. Downloading mp3?s from the labels site or from Amazon or iTunes markets the label and artists. The last point is concerts advertised in newspapers attract audience. TARGET AUDIENCE THE TARGET AUDIENCE FOR THIS LABEL IS ANYBODY WHO WANTS TO LISTEN TO ALTERNATIVE MUSIC. People who like to listen to grime and dubstep will really enjoy this label as they have many artists under this category. ...read more.

He has worked with other artists and has made the company label very well known and made some artists have very good experience and help them reach the uk charts in there category. All the artists though are marketed very equally to avoid favouritism. Compared to the big 3 Compared to the big three ninja tune is very small, with only 50 people employed to work there and help produce records compared to Warner who have over 4,000 workers. Distribution is the same as people buy the song and its sent straight after being brought. The profits are up in 20,000 in 2008 but compared to Warner who have over 1bn it?s a small number. Ninja tune have 50 less artists than Warner. ...read more.