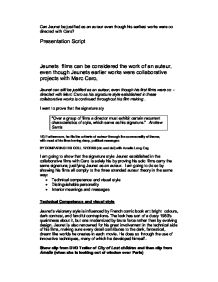 Can Jeunet be justified as an auteur even though his earliest works were co directed with Caro? Presentation Script Jeunets films can be considered the work of an auteur, even though Jeunets earlier works were collaborative projects with Marc Caro, Jeunet can still be justified as an auteur, even though his first films were co-directed with Marc Caro as his signature style established in these collaborative works is continued throughout his film making. I want to prove that the signature sty "Over a group of films a director must exhibit certain recurrent characteristics of style, which serve as his signature." Andrew Sarris 15) Furthermore, he fits the criteria of auteur through the commonality of theme, with most of his films having deep, political messages BY COMPARING HIS COLL. WORKS (clc and del) with Amelie Long Eng I am going to show that the signature style Jeunet established in the collaborative films with Caro is solely his by proving his solo films carry the same signature; justifying Jeunet as an auteur. I am going to do so by showing his films all comply to the three stranded auteur theory in the same way: * Technical competence and ...read more.

He does so to elevate the 'fairy tale' feel to his work (although Jeunet does so with a deliberate, contrasting nightmarish feel, to give edge to the worlds he creates). The City of Lost children is a prime example of this, which often uses wide angled lenses to distort human features and sets. (From source Two): This is a camera lens which has a wider than normal angle of view, and usually a short focal length. This produces an image that is foreshortened in the center and increasingly distorted in the outside edge. The effect is clearly visible and automatically catches the audiences attention at the beginning of the City of Lost Children clip. He has also developed his own camera, known as the 'snorrie cam' which he uses in his films, most predominantly Delicatessen. This is a camera attached to the actor or actresses body, but unlike a steadicam which absorbs all movement, this expresses each movement of the actor giving the audience a very direct and personal experience. Show clip from Delicatessen when snorriecam is used, extreme close up of face. ...read more.

Distinguishable Personality Jeunets style is immediately recognisable. In my primary research 75% of the people I questioned could distinguish his style from other current French films. This not only included people who knew Jeunet's work, but also those who had never heard of him before. As discussed in reference to his technical and visual competence, the trait characteristics of Jeunet's work are his use of heightened colour, distorted camera shots, innovative editing, relentless attention to detail, intricate contraptions and the dark, artificial, mythical ambience he creates in each film. There is also one common theme that is addressed in each of Jeunets films; Dreams. Show Clip from Delicatessen and A Very Long Engagement (Compare the two to justify) Jeunet is aware of his unique style and praises this for his success. As stated in an interview (SOURCE 1) he said; "I think I am the only director in the French language whose films are released everywhere in the world," he says. "Maybe I am lucky," he continues, more cautiously. "Or maybe it's because my films are more visual." His plots are so fantastical that they are accessible to a world wide audience. Jeunet ...read more.