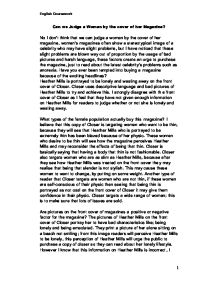 Can we Judge a Woman by the cover of her Magazine?

Can we Judge a Woman by the cover of her Magazine? No I don't think that we can judge a woman by the cover of her magazine, women's magazines often show a stereotypical image of a celebrity who may have slight problems, but I have noticed that these slight problems are blown way out of proportion by the usage of bad pictures and harsh language, these factors create an urge to purchase the magazine, just to read about the latest celebrity's problems such as anorexia. Have you ever been tempted into buying a magazine because of the exciting headlines? Heather Mills is portrayed to be lonely and wasting away on the front cover of Closer. Closer uses descriptive language and bad pictures of Heather Mills to try and achieve this. I strongly disagree with the front cover of Closer as I feel that they have not given enough information on Heather Mills for readers to judge whether or not she is lonely and wasting away. ...read more.

"Wasting away," is written next to the picture of Heather Mills bending over looking emaciated, the phrase "wasting away" may lead people to the perception of Heather Mills becoming thinner and thinner and risk the chance of suffering death. This is also another clever way of manipulating the readers into buying the magazine by causing them to think that Heather Mills is dying. I conclude that in my opinion we cannot judge a woman by the cover of her magazine because magazines exaggerate celebrities' problems in order to achieve a high number of sells. They do this on the front cover with big, bold headlines and appalling pictures of celebrities. It is a proven fact that many women do buy magazines like Closer and this portrays to me a sense of insecurity among these women. Closer use their front cover to appeal to the public about issues such as anorexia. The only reason for magazines lying about and ridiculing celebrities is to make sure that their sales are high and I believe they will do anything to ensure this. ?? ?? ?? ?? English Coursework 1 ...read more.