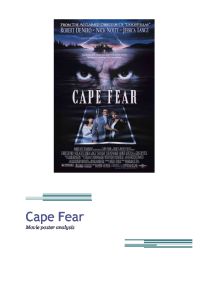 Cape Fear Movie poster analysis Cape Fear Movie poster analysis This poster uses minimal lighting but only focusing the light on a set of what seem very tired and rugged eyes, giving hints of distress and anger already from the movie poster. Catching the eyes of the audience it makes the audience believe somebody is watching them as they are viewing the poster, and also how the eyes are set in the lake as if he is a monster almost. The movie poster is set in the middle of a lake, it just so happens the lake is named after the title "Cape Fear" so the poster really sets the scene for the actual movie, showing the boat in the middle of nowhere with forestry by the sides gives a spook effect as if they are lost, with the eyes watching over the boat it gives the sense of maybe someone being hunted or spied on. The family photo at the bottom shows a standard American family but with a tear in the photo by the Daughter, with the daughter grasping to the father it connotes maybe that the daughter gets taken away, family problems also. A key signifier would be the Eyes in the center of the poster, and connotes that maybe the person who hide behinds those eyes has a revenge or a certain anger towards that family and is wanting to separate it. ...read more.

This poster doesn't really have a setting it used a black backdrop creating fear maybe, it uses a mid/long shot on Ashton capturing his costume which is of a regular guy with a plain t shirt and jacket, no/blank facial expression almost looks like he is in a deep shock, giving the audience the thought of what is wrong with him. And he has a body language as if something strange is happening to him, with his hands/palms spread openand the looking down of his body. The poster features symmetry and is split down the middle with X-rays of skills and underneath what seems to be a butterfly linking to the title "butterfly" that would be a key signifier of this poster and it all seems to be arising out of the characters body with some sort of holy/spooky light coming out of the center of the poster behind him. His hair is dragged over his eyes to cover them to create some sort of mystery. The slogan used is a bit of a riddle giving another hint of mystery, and the font used for the title is "FF disturbance" by the name of the font you can tell its suited for this kind of movie and a thriller, it displays "coming soon" in an red font and in capitals, red emphasizing death and emphasizing that the movie will soon be released. ...read more.

another movie poster with lack of colour and lighting, showing the doom and gloom thriller genre, and with the main characters centered, also by using famous actors to this genre such as "Robert Dinero" it adds automatic status to the movie, due to the fact people will have seen these actors in other movies and then will be drawn into watching this because of the actors last good performance. In most posters there is usually something that hints towards the story line or gives the story away so the audience know what kind of movie it is, in this poster the three males have suspicious faces and all are dressed in a suit maybe signifying they are in a "gang" and the fashion adds to the image they are displaying. The slogan is a line from the movie, which is well known and links to the story line greatly proving that it is about some sort of gang or "the mafia" and shows its from someone's point of view who is or aspires to be a "gangster". Another one worded title that can make the audience ask questions and the slang links itself to a specific target audience that being older males by using "fellas" it refers to males in society. Also using the bold, simple font with the one word title makes it simple to stick inside the audiences mind, as its catchy and small to remember. ?? ?? ?? ?? Admin Admin 4( 1( ...read more.