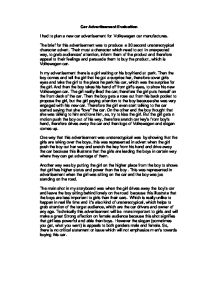 Car Advertisement Evaluation I had to plan a new car advertisement for Volkswagen car manufactures. The brief for this advertisement was to produce a 30 second unstereotypical character advert. Their must a character which need to act in unexpected way, to grab audiences' attention, inform them of the product and therefore appeal to their feelings and persuade them to buy the product, which is Volkswagen car. In my advertisement there is a girl waiting or his boyfriend at park. Then the boy comes and tell the girl that he got a surprise her, therefore cover girls eyes and take the girl to the place he park his car, which was the surprise for the girl. ...read more.

But the girl gets n motion push the boy out of his way, therefore s****h car key's from boy's hand, therefore drives away the car and then logo of Volkswagen and slogan comes up. One way that this advertisement was unstereotypical was by showing that the girls are taking over the boys, this was represented in advert when the girl push the boy out her way and s****h the key from his hand and drive away the car because this illustrate that the girls are leading the boys in certain way where they can get advantage of them. Another way was by putting the girl on the higher place from the boy to shows that girl has higher status and power than the boy. ...read more.

Technically this advertisement will be more important to girls and will make a great Strong affection on female audience because this shot signifies that girl less powerful and able then boys. However the slogan (sometimes you get, what you want) is appeals to both genders male and female. So, there is no critical statement or issue which will not emphasize men's towards buying this car. I think I carried out the task successfully because I have used the unstereotypical charter really well which will make a great impact on the target audience and I also have used good amount media techniques which includes camera angle, location of scenes and slogan. The thing that I would try to improve would be music because I am not really impressed with my selective, doesn't realty stick to the outcome. ...read more.