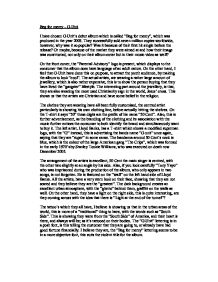 Beg for mercy - G-Unit I have chosen G-Unit's debut album which is called "Beg for mercy", which was produced in the year 2003. They successfully sold seven million copies worldwide, however, why was it so popular? Was it because of their first hit single before the release? Or maybe, because of the market they were aimed at and how their image was constructed, not only on their album cover but in their music video as well? On the front cover, the "Parental Advisory" logo is present, which displays to the consumer that the album does have language of an adult nature. On the other hand, I feel that G-Unit have done this on purpose, to attract the youth audience, by making the album to look "cool". ...read more.

Also, this is further advertisement, as the branding of the clothing and its association with the music further entices the consumer to both identify the brand and simultaneously want to buy it. The left artist, Lloyd Banks, has a T-shirt which shows a modified superman logo, with the "G" instead, this is advertising the bands name "G-unit" once again, saying that they are "super" in some sense. The bandanna around 50 Cent's neck is blue, which is the colour of the large American gang "The Crips", which was formed in the early 1970's by Stanley Tookie Williams, who was executed on death row December 2005. The arrangement of the artists is excellent, 50 Cent the main singer is centred, with the other two slightly at an angle by his side. ...read more.

This is showing they were from the "South Side" of America, and their heart is there, and always will be; as it's tattooed on their bodies. The "G-Unit" lettering is in a posh font, is this telling the customer that they are going to, or already have had good fortune financially. I believe they are, the "Beg for mercy" lettering seems to be in a more objective font, this suits the violent title for the album. In conclusion, the album cover definitely is aimed at a specific target audience; the genre is clearly rap/hip hop. The representation of all the artists is phenomenal, with sharp and concise imagery supporting this. By Satpal Johal 10PTM ...read more.