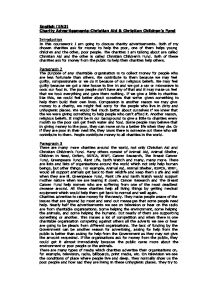 English (EN3) Charity Advertisements-Christian Aid & Christian Children's Fund Introduction In this coursework I am going to discuss charity advertisements. Both of my chosen charities ask for money to help the poor, one of them helps young children and the other, poor people. The charities I am talking about are called Christian Aid and the other is called Christian Children's Fund. Both of these charities ask for money from the public to help their charities help others. Paragraph 2 The purpose of any charitable organisation is to collect money for people who are less fortunate than others. We contribute to them because we may feel guilty, compassionate or we do it because of our religious beliefs. We may feel guilty because we got a nice house to live in and we got a car or microwave to cook our food in. The poor people don't have any of that and it may make us feel that we took everything and gave them nothing. If we give a little to charities like this, we could feel better about ourselves that we've given something to help them build their own lives. Compassion is another reason we may give money to a charity, we might feel sorry for the people who live in dirty and unhygienic places. We would feel much better about ourselves if we knew that the we were giving something to help people who can't afford it. Another reason, religious beliefs. It might be in our background to give a little to charities every month so the poor can get fresh water and food. ...read more.

Both of them are Christian organisations and help poor people who live in undeveloped countries and places. Both organisations give a full in-depth study of what their organisations do to fulfil their goals and how we can donate money. They are both similar and ask for donations. Paragraph 6 This Christian Aid advertisement shows me a picture of two full page cans. It is a bright red colour which stands out from the rest of the page, so it catches your eyes attention. Something like this would make us immediately get up and read the full leaflet. When we start to read the full leaflet we see the other 4 pictures and we can see what the leaflet is really about. We can see it is not really about coke cans or drinking coke, that we really must have thought it was about, but it is about people of the third world who suffer from dehydration because of lack of fresh and clean water. After reading the full leaflet the reader would understand that people in third world countries only have "Fresh Air" to drink. The line underneath the "Fresh Air" logo is "The only thing." When the word 'only' is underlined it shows that it's the one thing they get and nothing else. Underneath this big logo, which looks like the original "Coca Cola" logo, there is a short message which says, "Dying for a drink? Imagine if this was all you had to drink today." This shows what people in the third world have to do all their lives. ...read more.

Both of the advertisements have very large pictures which we can see very clearly and I think this is good because it gets more noticed. Paragraph 10 From the two advertisements, I think the one that would get more donations would be Christian Aid. This advertisement has loads of pictures or imagery and it has two large pictures on the front of it. The fact that it has been made into a leaflet is also a good idea because I think it can fit in more information about the charity. Having two pages to display information is also a good idea because this also saves loads of money. The Christian Children's Fund advertisement has only one picture of a girl unlike the Christian Aid advertisement, which has loads of pictures featuring people working hard to grow their own crops and building wells to get their own fresh water. The important facts of the Christian Aid advertisement stick out as they have printed it in bolder text and it is easier to read because the writing and font is quite clear too. As I already explained before, the pictures are quite big and colourful so they attract more people to it than the Christian Children's Fund which is quite plain and simple. As the National Lottery have now started donating money to charities, it has become a greater competition for the other organisations. The National Lottery is also known world wide and gets more attention than other organisations because it is well known for giving away money. ?? ?? ?? ?? ...read more.